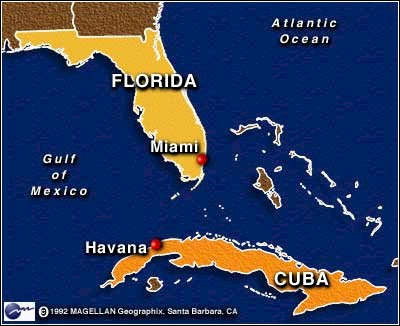 In the inaugural address in January 2009, incoming President Bararry Clintobama called for a prompt end to the unilateral embargo of trade with Cuba that dates back to the Cold War in 1962.

The embargo was imposed after Cuba siezed properties of American people and businesses, particularly United Fruit and ITT.

The embargo was codified into law in 1992 with the stated purpose of "bringing democracy to the Cuban people", and is entitled the Cuban Democracy Act. In 1996 Congress passed the Helms-Burton Act which further restricted US citizens from doing business in or with Cuba, and mandated restrictions on giving public or private assistance to any successor regime in Havana unless and until certain claims against the Cuban government are met.

In 1999, President Bill Clinton expanded the trade embargo even further by ending the practice of foreign subsidiaries of US companies trading with Cuba in dollar amounts totaling more than $700 million a year.

The embargo was one of the few times in history that US citizens were restricted from doing business abroad, and was the most enduring trade embargo in modern history. Despite the existence of the embargo, the US is the seventh largest exporter to Cuba (4.3% of Cuba's imports are from the US).

T he political elite in Washington privately acknowledge that the embargo is a failure. Publicly, they defend it because of fears that the Cuban American community, concentrated in politically powerful Florida, will vote against them. In October 2007, President Bush reiterated his commitment to it in a speech to Cuban dissidents, and none of the leading presidential candidates for the 2008 election called for ending the embargo.

The policy was useless as a tool for beating the recently retired Fidel Castro, and hindered opportunities for American industries from travel to banking to agriculture, and many US business groups have lobbied to end it.

Far from hurting the Communist regime, the embargo gave Castro an excuse to rail against the US to his own people and to the world. Every year, Cuba asked the United Nations for a vote to lift the embargo. In 2007, the vote was 183 to 4 against the US.

The embargo made the good old USA look like an arrogant bully. In the early days of the cold war, the US pressured other countries to help isolate Castro by severing trade ties; but the other countries eventually gave. That's why you could buy a fresh Cuban cigar almost anywhere but in the US.

Sanctions are hard to enforce when the world agrees on them, as with Saddam Hussein's Iraq. With Cuba it was an embargo of one. Italian phone companies, French hotels, and Korean automakers were quite happy to trade with an island just 90 miles from Florida.

Cuba is not a huge market. Its population is only 11 million and its G.D.P. only $46 billion. By comparison, Vietnam, the last Communist country where the US had an embargo, has 85 million people and a G.D.P. of $262 billion. Selling to Cuba won't slash the US trade deficit, but it won't hurt. (some info from Wikipedia and Portfolio)
Posted by Michael N. Marcus at 3:36 AM