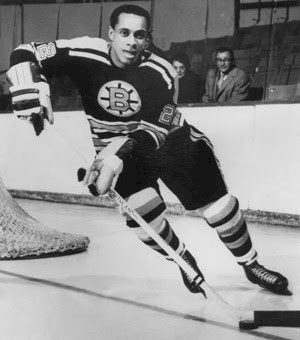 Willie O'Ree, (born in 1935, in Fredericton, New Brunswick, Canada) is a retired professional ice hockey player, known best for being the first black player in the National Hockey League. He played as a winger for the Boston Bruins.

He is frequently but erroneously referred to as the first African American player, though he is Canadian. O'Ree is often called "the Jackie Robinson of ice hockey" due to breaking the color barrier in the sport.

Midway through his second minor-league season with the Quebec Aces, O'Ree was called up to the Boston Bruins of the NHL to replace an injured player. O'Ree was 95% blind in his right eye due to being hit there by an errant puck two years earlier, which normally would have precluded him from playing in the NHL. However, O'Ree managed to keep it secret, and made his NHL debut with the Bruins on January 18, 1958, against the Montreal Canadiens, becoming the first black player in league history. He played in only two games that year, and came back in 1961 to play 43 games. He scored four goals and 10 assists in 1961.

Willie O'Ree noted that "racist remarks were much worse in the US cities than in Toronto and Montreal," the two Canadian cities hosting NHL teams at the time, and that "Fans would yell, 'Go back to the South' and 'How come you're not picking cotton?' Things like that. It didn't bother me. I just wanted to be a hockey player, and if they couldn't accept that fact, that was their problem, not mine."

After O'Ree, there was no other black player in the NHL until fellow Canadian Mike Marson was drafted by the Washington Capitals in 1974. There were 17 black players in the NHL as of the mid-2000s, the most prominent including Canadians Jarome Iginla and Anson Carter and American Mike Grier. NHL players are now required to enroll in a diversity training seminar before each season, and racially based verbal abuse is punished through suspensions and fines.

O'Ree was inducted into the New Brunswick Sports Hall of Fame in 1984. He later became the Director of Youth Development for the NHL/USA Hockey Diversity Task Force, a non-profit program for minority youth that encourages them to learn and play hockey.

On January 19, 2008, the Bruins and NHL deputy commissioner Bill Daly honoured O'Ree at TD Banknorth Garden in Boston to mark the 50th anniversary of his NHL debut. In addition, The Sports Museum of New England established a special exhibit on O'Ree's career, comprising many items on loan from his personal collection. Those in attendance included a busload of friends from O'Ree's hometown of Fredericton. Two days earlier, the City of Fredericton honoured him by naming a new sports complex after him. (info fro mWikipedia)
Posted by Michael N. Marcus at 5:24 AM

Willy O'Ree's story is facinating to me because I experienced a taste
of the unforgiving racist name calling that came with being a black hockey player growing up in Evanston, Illinois a suburb just outside of Chicago. While playing in a Canadian tounament as a squirt I learned that a "Jungle Bunny" meant the same as a n---ger.
All that being said I still loved to play the game of hockey.