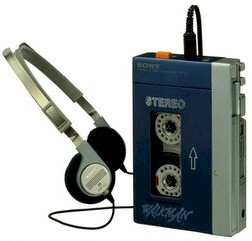 Walkman is a popular Sony brand used to market its portable audio and video players. The Walkman introduced and popularized a change in music listening habits, allowing people to carry their own choice of music with them and listen privately through headsets without disturbing others. It prepared the world for the iPod and other modern portable media players.

The original Walkman was marketed in 1979 as the Walkman in Japan, the Soundabout in many other countries including the US, Freestyle in Sweden and the Stowaway in the UK. It was created by audio division engineer Nobutoshi Kihara for Sony co-chairman Morita, who wanted to be able to listen to operas during his frequent transpacific plane trips.

Morita hated the name "Walkman" and asked it to be changed, but relented after being told that an ad campaign had begun with the Walkman name and would be too expensive to change.

However, the first portable personal stereo audio cassette player, called Stereobelt, had been invented earlier by the German-Brazilian Andreas Pavel in 1972, and patented in the US in 1978. After lengthy legal battles, Pavel was finally recognized by Sony in 2003 as the original inventor of the Walkman.

"Walkman", "Pressman", "Watchman", "Scoopman", "Discman", and "Talkman" are trademarks of Sony, and have been applied to many portable entertainment devices. Sony continues to use the "Walkman" brand name for portable audio devices, after the "Discman" name for CD players was dropped in the late 1990s. According to Sony, the plural form is "Walkman Personal Stereos." rather than "Walkmans" or "Walkmen." (info from Wikipedia)
Posted by Michael N. Marcus at 4:07 AM

tahh this helpedme with my homework