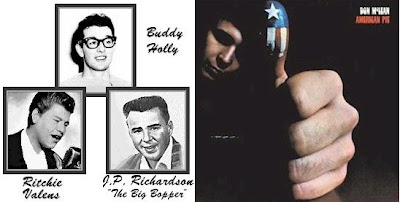 On February 3, 1959, a small-plane crash near Clear Lake, Iowa, killed three popular American rock and roll musicians: Buddy Holly, Ritchie Valens, and J.P. "The Big Bopper" Richardson, as well as the pilot, Roger Peterson. The day was later called The Day the Music Died by Don McLean in his 1971 tribute song about the crash, American Pie".

"The Winter Dance Party" was a tour that was set to cover 24 Midwestern cities in three weeks. A logistical problem with the tour was the amount of travel, as the distance between venues was not a priority when scheduling each performance. For example, the tour would start at venue A, travel two hundred miles to venue B, and travel back one hundred seventy miles to venue C, which was only thirty miles from venue A. Adding to the disarray, the tour bus used to carry the musicians was ill-prepared for the weather; its heating system broke shortly after the tour began. Drummer Carl Bunch developed a severe case of frostbitten feet while on the bus and was taken to a local hospital. As he recovered, Buddy Holly and Ritchie Valens took turns with the drums.

The Surf Ballroom in Clear Lake, Iowa was never intended to be a stop on the tour, but promoters, hoping to fill an open date, called the manager of the ballroom at the time and offered him the show. He accepted and the date of the show was set for February 2.

When Buddy Holly arrived at the ballroom that evening, he had had enough of the tour bus, and asked his bandmates that, once the show was over, they should try to charter a plane to get to the next stop on the tour, an armory in Moorhead, Minnesota. The destination of the flight was Hector Airport in Fargo, North Dakota (directly across the Red River from Moorhead), as Moorhead did not have an airport. According to VH-1's Behind the Music: The Day the Music Died, Holly was also upset that he had run out of clean undershirts, socks, and underwear, and Holly said he needed to do some laundry before the next performance, and the local laundromat in Clear Lake was closed for repairs.

Flight arrangements were made with Roger Peterson, 21, a local pilot who worked for Dwyer Flying Service in Mason City, Iowa. A fee of $36 per person was charged for the single engine Beechcraft Bonanza, which could seat three passengers in addition to the pilot.

Richardson had developed a case of the flu during the tour (erroneously thought to have been caused by riding on the unheated bus) and asked one of Holly's bandmates, Waylon Jennings, for his seat on the plane; Jennings agreed to give up the seat. According to an account by Jennings years later, when Holly heard about this, his reply to Jennings was, "Well, I hope your ole bus freezes up!" to which Jennings replied, "Well, I hope your damn plane crashes!" This exchange of words, though made in jest at the time, haunted Jennings for many years afterward.

Ritchie Valens had never flown in a small plane before, and asked Holly's remaining bandmate on the plane, Tommy Allsup, for the seat. Tommy said "I'll flip ya for the remaining seat." Contrary to what is seen in biographical movies, that coin toss did not happen at the airport shortly before takeoff, nor did Buddy Holly toss it. The toss happened at the ballroom shortly before departure to the airport, and the coin was tossed by a DJ who was working the concert that night. Valens won a seat on the plane.

Dion DiMucci of Dion & The Belmonts, who was the fourth headliner on the tour, was approached to join the flight as well; however, the price of $36 was too much. Dion had heard his parents argue for years over the $36 rent for their apartment and could not bring himself to pay an entire month's rent for a short plane ride.

At approximately 1:00 AM Central Time on February 3, the plane took off from Mason City Municipal Airport. Around 1:05, Jerry Dwyer, owner of Dwyer Flying Service, could see the lights of the plane start to descend from the sky to the ground. At the time, he thought it was an optical illusion because of the curvature of the Earth and the horizon.

The pilot, Roger Peterson, was expected to file his flight plan once the plane was airborne, but Peterson never called the tower. Repeated attempts by Dwyer to contact his pilot failed. By 3:30 AM, when the airport at Fargo had not heard from Peterson, Dwyer contacted authorities and reported the aircraft missing.

Around 9:15 in the morning, Dwyer took off in another small plane to fly Peterson's intended route. A short time later he spotted the wreckage in a cornfield about five miles northwest of the airport. The manager of the Surf Ballroom (who drove the performers to the airport, and also witnessed the plane taking off) made the positive identification of the performers.

The Bonanza was at a slight downward angle and banked to the right when it struck the ground at around 170 mph. The plane tumbled and skidded another 570 feet across the frozen landscape before the crumpled ball of wreckage piled against a wire fence at the edge of the property. The bodies of Holly and Valens lay near the plane, Richardson was thrown into a neighboring cornfield, and Peterson remained trapped inside. All four had died instantly from "gross trauma" to the brain, the county coroner declared.

Investigators came to the conclusion that the crash was due to a combination of poor weather conditions and pilot error. Peterson had done poorly on previous flight instrumentation tests and had not been rated for night-time flight, when he would have to rely on his instruments rather than his own vision. It was also found that Peterson was not given an accurate advisory of the weather conditions of his route, which, given his known limitations, might have caused him to postpone the flight. (info from Wikipedia)
Posted by Michael N. Marcus at 3:43 AM