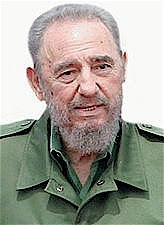 "I will not aspire nor accept, the post of President of the Council of State and Commander in Chief," read a letter signed by Castro published quietly overnight without advance warning in the online edition of the Communist Party daily Granma.

The new National Assembly is meeting for first time Sunday since January elections to pick the governing Council of State, including the presidency Castro holds. There had been wide speculation about whether he would accept a nomination for re-election to that post or retire.

The 81-year-old's overnight announcement effectively ends his rule of almost 50 years over Cuba, positioning his 76-year-old brother, Raul, for permanent succession to the presidency.

Over the decades, the fiery guerrilla leader reshaped Cuba into a communist state 90 miles from U.S. shores and survived assassination attempts, a CIA-backed invasion and a missile crisis that brought the world to the brink of nuclear war. Since his rise to power on New Year's Day 1959, Mr. Castro resisted attempts by 10 US administrations to topple him, including the disastrous Bay of Pigs invasion in 1961.

The US discovery of nuclear-armed missiles on the island led to a showdown of the world's then-superpowers before the Soviet Union agreed to remove them.

Monarchs excepted, Castro was the world's longest ruling head of state. His ironclad rule ensured Cuba remained among the world's five last remaining communist countries, long after the breakup of the Soviet Union and collapse of communism across Eastern Europe.

Castro's designated successor was his brother, Raul, five years younger and No. 2 in Cuba's power structure as defense minister. Raul Castro had been in his brother's rebel movements since 1953.

Castro had already temporarily ceded his powers to his brother on July 31, 2006, when he announced that he had undergone intestinal surgery. More than a year after falling ill, the elder Castro still hadn't been seen in public, appearing only sporadically in official photographs and videotapes and publishing dense essays about mostly international themes as his younger brother began to consolidate his rule.

But the US, bent on blocking Castro's plans for his younger brother to succeed him, built a detailed plan in 2005 for American assistance to ensure a democratic transition on the island of 11.2 million people after his death. Castro and other Cuban officials long insisted "there will be no transition" and that the island's socialist political and economic systems will live on long after he is gone.

Castro's supporters admired his ability to provide a high level of health care and education for citizens while remaining fully independent of the US But his detractors called him a dictator whose totalitarian government denied individual freedoms and civil liberties such as speech, movement and assembly. (info from The Wall Street Journal)
Posted by Michael N. Marcus at 3:45 AM