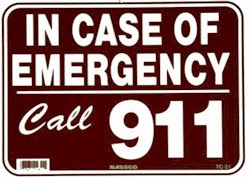 9-1-1 or 911 (usually pronounced "nine-one-one") is the emergency telephone number for the North American Numbering Plan (NANP).

Before the dial telephone came into widespread usage, a telephone caller simply picked up the phone receiver or handset and waited for the operator to answer "number please?"

The caller then said "connect me to the police," "I want to report a fire," or "I need an ambulance." It was usually not necessary to ask for any of these services by number, even in a large city. Furthermore, the operator instantly knew the calling party's number even if he couldn't stay on the line by simply looking at the number above the line jack of the calling party.

In small towns, telephone operators frequently went the extra mile by making sure they knew the locations of local doctors, vets, law enforcement personnel, and even private citizens who were willing or able to help in an emergency. Frequently, the operator also activated the town's fire alarm.

When cities and towns began to convert to dial or, "automatic" telephone service, many people were concerned about the loss of the personalized service that had been provided by local operators. This problem was partially solved by telling people to dial "0" for the local assistance operator if they did not know the Fire or Police Department's full number.

Generations of school children were taught to "dial 0 in case of emergency," and this situation remained in place in some areas into the early 1980s. Now, children are taught to call 911.

The push for the development of a nationwide emergency telephone number came in 1957 when the National Association of Fire Chiefs recommended a single number to be used for reporting fires. In 1967 the President's Commission on Law Enforcement and Administration of Justice recommended the creation of a single number that can be used nationwide for reporting emergencies. The burden then fell on the Federal Communications Commission, which then met with AT&T in November 1967 in order to come up with a solution.

In 1968, a solution was agreed upon. AT&T had chosen the number 911, which met the requirements that it be brief, easy to remember, dialed easily, and that it worked well with the phone systems in place at the time. How the number 911 itself was chosen is not well known and is subject to much speculation. However, many assert that the number 911 was chosen to be similar to the numbers 2-1-1 (long distance), 4-1-1 (information, later called "directory assistance"), and 6-1-1 (repair service), which had already been in use by AT&T since 1966. Also, it was necessary to ensure that the 9-1-1 number was not dialed accidentally, so 9-1-1 made sense because the numbers "9" and "1" were on opposite ends of a dial.

Furthermore, the North American Numbering Plan in use at the time established rules for which numbers can be used for area codes and exchanges. At the time, the middle digit of an area code had to be either a 0 or 1, and the first two digits of an exchange could not be a 1. At the telephone switching station, the second dialed digit was used to determine if the number was long distance or local. If the number had a 0 or 1 as the second digit, it was long distance, and it was a local call if it was any other number. Thus, since the number 911 was detected by the switching equipment as a special number, it could be routed appropriately. Also, since 911 was a unique number, never having been used as an area code or service code .

AT&T announced the selection of 9-1-1 as their choice of the three-digit emergency number at a press conference in Washington, DC.

In Alabama, Bob Gallagher, president of the independent Alabama Telephone Co. read an article in the Wall Street Journal, which reported the AT&T 911 announcement. Gallagher’s competitive spirit motivated him to beat AT&T to the punch by being the first to implement the 911 service, somewhere within the Alabama Telephone Co. territory.

He contacted Robert Fitzgerald, who was Inside State Plant Manager for ATC, who in turn recommended Haleyville, Alabama as the prime site. Gallagher later issued a press release announcing that the 911 service would begin in Haleyville on Feb. 16, 1968. Fitzgerald designed the circuitry and with the assistance of technicians Jimmy White, Glenn Johnston, Al Bush and Pete Gosa, they quickly completed the central office work and installation.

Just 35 days after AT&T's announcement, on February 16, 1968, the first-ever 9-1-1 call was placed by Alabama Speaker of the House Rankin Fite from Haleyville City Hall to US Rep. Tom Bevill at the city's police station. Bevill reportedly answered the phone with "Hello." Attending with Fite was Haleyville mayor James Whitt. At the police station with Bevill was Gallagher and Alabama Public Service Commission director Eugene "Bull" Connor (formerly the Birmingham police chief involved in federal desegregation). Fitzgerald was at the ATC central office serving Haleyville, and actually observed the call pass through the switching gear, as the mechanical equipment clunked out "9-1-1."

In 1973, the White House urged nationwide adoption of 911, but widespread adoption was slowed by the public's traditional reliance upon the live human operators which AT&T continued to make available at no cost to anyone who dialed 'O' from any telephone.

It wasn't until AT&T was broken up into seven regional operating companies as a result of anti-trust action on January 1, 1984 that no-cost access to human operators began to become increasingly unavailable and cities and counties began to perceive a real need to spend the money to create 911 call centers to support the emergency number.

"9-1-1 Emergency Telephone Number Day" was proclaimed, by President Ronald Reagan in 1987 to encourage adoption across the country. In 1999, President Bill Clinton signed the bill that designated 911 as the nationwide emergency number. Even though 9-1-1 was first introduced in 1968, as of 2008 the network still does not completely cover some rural areas of the United States and Canada. (info from Wikipedia)
Posted by Michael N. Marcus at 3:56 AM