2008: Over 1% of American adults locked up;
highest rate and number in the world.
4 states spend more on jail than on school. 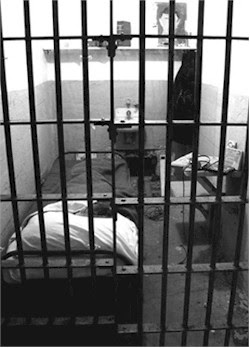 For the first time in US history, more than one of every 100 adults is in jail or prison, according to a new report documenting America's rank as the world's No. 1 incarcerator. It urges states to curtail corrections spending by placing fewer low-risk offenders behind bars.

Using state-by-state data, the report says 2,319,258 Americans were in jail or prison at the start of 2008 - one out of every 99.1 adults. Whether per capita or in raw numbers, it's more than any other nation.

The report, released Thursday by the Pew Center on the States, said the 50 states spent more than $49 billion on corrections last year, up from less than $11 billion 20 years earlier. The rate of increase for prison costs was six times greater than for higher education spending, the report said.

The steadily growing inmate population "is saddling cash-strapped states with soaring costs they can ill afford and failing to have a clear impact either on recidivism or overall crime," the report said.

Susan Urahn, managing director of the Pew Center on the States, said budget woes are pressuring many states to consider new, cost-saving corrections policies that might have been shunned in the recent past for fear of appearing soft on crime.

"We're seeing more and more states being creative because of tight budgets," she said in an interview. "They want to be tough on crime. They want to be a law-and-order state. But they also want to save money, and they want to be effective."

The report cited Kansas and Texas as states that have acted decisively to slow the growth of their inmate population. They are making greater use of community supervision for low-risk offenders and employing sanctions other than reimprisonment for offenders who commit technical violations of parole and probation rules.

While many state governments have shown bipartisan interest in curbing prison growth, there also are persistent calls to proceed cautiously.

"We need to be smarter," said David Muhlhausen, a criminal justice expert with the conservative Heritage Foundation. "We're not incarcerating all the people who commit serious crimes. But we're also probably incarcerating people who don't need to be."

According to the report, the inmate population increased last year in 36 states and the federal prison system.

The largest percentage increase - 12 percent - was in Kentucky, where Gov. Steve Beshear highlighted the cost of corrections in his budget speech last month. He noted that the state's crime rate had increased only about 3 percent in the past 30 years, while the state's inmate population has increased by 600 percent.

The report was compiled by the Pew Center's Public Safety Performance Project, which is working with 13 states on developing programs to divert offenders from prison without jeopardizing public safety.

"Getting tough on criminals has gotten tough on taxpayers," said the project's director, Adam Gelb.

According to the report, the average annual cost per prisoner was $23,876, with Rhode Island spending the most ($44,860) and Louisiana the least ($13,009). It said California - which faces a $16 billion budget shortfall - spent $8.8 billion on corrections last year, while Texas, which has slightly more inmates, was a distant second with spending of $3.3 billion.

On average, states spend 6.8 percent of their general fund dollars on corrections, the report said. Oregon had the highest spending rate, at 10.9 percent; Alabama the lowest at 2.6 percent.

Four states - Vermont, Michigan, Oregon and Connecticut - now spend more on corrections than they do on higher education, the report said.

"These sad facts reflect a very distorted set of national priorities," said Sen. Bernie Sanders, an independent from Vermont, referring to the full report. "Perhaps, if we adequately invested in our children and in education, kids who now grow up to be criminals could become productive workers and taxpayers."

The report said prison growth and higher incarceration rates do not reflect an increase in the nation's overall population. Instead, it said, more people are behind bars mainly because of tough sentencing measures, such as "three-strikes" laws, that result in longer prison stays.

"For some groups, the incarceration numbers are especially startling," the report said. "While one in 30 men between the ages of 20 and 34 is behind bars, for black males in that age group the figure is one in nine."

The racial disparity for women also is stark. One of every 355 white women aged 35 to 39 is behind bars, compared with one of every 100 black women in that age group.

The report said the United States incarcerates more people than any other nation, far ahead of more populous China with 1.5 million people behind bars. It said the US also is the leader in inmates per capita (750 per 100,000 people), ahead of Russia (628 per 100,000) and other former Soviet bloc nations which round out the Top 10.

The US also is among the world leaders in capital punishment. According to Amnesty International, its 53 executions in 2006 were exceeded only by China, Iran, Pakistan, Iraq and Sudan. (info from The Assocuated Press)