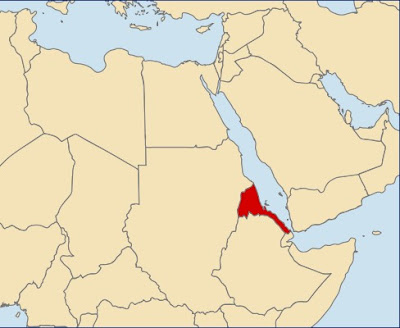 Eritrea, in Northeast Africa, became an Italian colony in 1890. After Italy's losses in World War II, Eritrea was ruled as a United Nations protectorate between 1941 and 1952 administered by the British. From 1951 to 1962, after a UN resolution, Eritrea was an autonomous territory federated with Ethiopia.

The UN decision was made without much attention to the desires of the Eritrean people. Increasing unrest and resistance in Eritrea against the federation with Ethiopia eventually led to a decision by the Marxist Ethiopian government to annex Eritrea as a province in 1962. An Eritrean independence movement formed in the early 1960s which later erupted into a 30-year civil war against successive Ethiopian governments that ended in 1991. Following a UN-supervised referendum in which the Eritrean people overwhelmingly voted for independence, Eritrea declared its independence and gained international recognition in 1993.

Eritrea is a sliver of land along the Red Sea coast, about the same size (36,170 square miles) as Maine, with a population of about 3.5 million. Running counter to the common image of a chaotic Africa, Eritrea is a country with a vision and strong sense of identity. Although the modern infrastructure of the former Italian colony was destroyed, the protracted guerrilla war brought out the best in the Eritrean people. They learned to be completely self-reliant, to work together harmoniously with no thought except the ultimate goal of victory. While the international media ignored or misread the Eritrean struggle for independence, the fighters created a new culture, a mosaic of traditional beliefs, battlefield pragmatism, and political ideology from East and West.

Eritrea allowed its citizens to go online in 2000, the last country to allow access to the Internet. (info from bnet.com, Wikipedia & Habtom Yohannes)
Posted by Michael N. Marcus at 6:37 AM