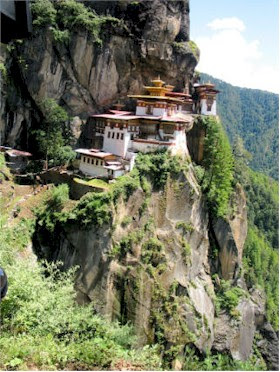 April 2002 was a turbulent month for the people of Bhutan. One of the remotest nations in the world, perched high in the snowlines of the Himalayas, suffered a crime wave. The 700,000 inhabitants of a kingdom that calls itself the Land of the Thunder Dragon had never experienced serious law-breaking before. Yet now there were reports of fraud, violence and murder.

The Bhutanese had always been proud of their incorruptible officials - until Parop Tshering, the chief accountant of the State Trading Corporation, was charged with embezzling. Every aspect of Bhutanese life is steeped in Himalayan Buddhism, and yet thieves vandalized and robbed three ancient religious monuments.

In Thimphu, Bhutan's sedate capital, where overindulgence in rice wine had been the only social vice, a truck driver, bludgeoned his wife to death after she discovered he was addicted to heroin. In Bhutan, family welfare has always come first; then a farmer drove his terrified in-laws off a cliff in a drunken rage.

Why was this kingdom with its head in the clouds falling victim to the kind of crime associated with urban life in America and Europe? For the Bhutanese, the only explanation seemed to be five large satellite dishes, planted in a vegetable patch.

In June 1999, Bhutan became the last nation in the world to turn on television. The Dragon King had lifted a ban on the TV screen as part of a radical plan to modernize his country, and thousands began to pay about $10 per month for cable TV service that provided 46 channels.

Four years later, those same subscribers were beginning to accuse television of smothering their unique culture, of promoting a world that is incompatible with their own, and of threatening to destroy a place where time has stood still for half a millennium.

A refugee monk from Tibet, the Shabdrung, created this tiny country in 1616 as a Buddhist sanctuary, a refuge from the ills of the world. So successful were he and his descendants at isolating themselves that by the 1930s virtually all that was known of Bhutan in the west was James Hilton's novel, Lost Horizon.

He called it Shangri-la, a secret Himalayan valley, whose people never grew old and lived by principles laid down by their high lama: "Here we shall stay with our books and our music and our meditations, conserving the frail elegancies of a dying age."

In the real Bhutan, there were no public hospitals or schools until the 1950s, and no paper currency, roads or electricity until several years after that. Bhutan had no diplomatic relations with any other country until 1961, and the first invited western visitors came only in 1974, for the coronation of Dragon King Jigme Singye Wangchuck. Today, although many people drive cars, there is still no word in the Bhutanese language for "traffic jam."

But none of these developments has made such a fundamental impact on Bhutanese life as TV. Since the April 2002 crime wave, the national newspaper has called for the censoring of television. An editorial warns: "We are seeing for the first time broken families, school dropouts and other negative youth crimes. We are beginning to see crime associated with drug users all over the world - shoplifting, burglary and violence."

The Bhutanese government itself says that it is too early to decide. Sangay Ngedup, minister for health and education, will concede that there is a gulf opening up between old Bhutan and the new: "Until recently, we shied away from killing insects, and yet now we Bhutanese are asked to watch people on TV blowing heads off with shotguns. Will we now be blowing each other's heads off?"

The people of Bhutan, however, finally decided for themselves what would make them happy. France 1998 was driving the soccer-mad kingdom into a frenzy of envy of those who were able to watch the World Cup on television. The small screen had always been prohibited in Bhutan, although the kingdom was crisscrossed by satellite signals that it was finding increasingly difficult to keep out. Even the king was rumored to have a satellite TV at his palace. Faced by recriminations, the government relented and Bhutan's Olympic Committee was permitted to erect a giant screen in a stadium - but only temporarily.

A TV screen in the middle of Thimphu was a revolutionary sight. The current Dragon King's father initiated a careful program of modernization that saw his people embrace the kind of material progress that most western countries take centuries to achieve: education, modern medicine, transportation, currency, electricity. However, mindful of those afraid that foreign influences could destroy Bhutanese culture, he attempted to inhibit conspicuous consumption. No Coca-Cola. And definitely no television.

By France 1998, Bhutan had a new Dragon King and, under growing pressure from an unsettled country, he had a new political agenda. That year, King Jigme Singye Wangchuck announced he would give up his role as head of government and cede power to the national assembly. The people would be consulted about the drafting of a constitution. The process would complete Bhutan's transformation from monarchist Shangri-la into a modern democracy. And television would play its part.

The prime minister of Bhutan, Kinzang Dorji, wants the Bhutanese people to run their own country. "Many are frightened of the responsibility," he said. "A lot of things have changed very quickly in Bhutan, and we do recognise that some people feel lost, at sea. Watching news on the BBC and CNN enables them to see how democracies work in other parts of the world, how people can take charge of their own destinies. The old feudal ways have to end."

The year after France beat Brazil 3-0 in the World Cup final, the people of Thimphu gathered once again in Changlimithang stadium, this time to celebrate the Dragon King's silver jubilee. On June 2, 1999, he stood before them to announce that now they could watch TV whenever they wanted. "But not everything you will see will be good," he warned. "It is my sincere hope that the introduction of television will be beneficial to our people and country."

Inside the headquarters of Sigma Cable, the walls are papered with an X-Files calendar and posters for an HBO show called Hollywood Beauties. Beneath a portrait of the Dragon King, the in-store TV shows wrestling before BeastMaster comes on. A man in tigerskin trunks has trained his marmosets to infiltrate the palace of a barbarian king. When the monarch is decapitated, the children watching outside screech with glee. Inside the office, the staff are fighting for the remote control, channel-hopping. President Bush in a 10-gallon hat welcomes Jiang Zemin to Texas. Midgets wrestle on Star World. Female skaters catfight on Rollerball.

Today, Sigma Cable, whose feed comes from five large satellite dishes at the edge of the city, is the most successful of more than 30 cable operators. Together, they supply virtually the entire country, ensuring that even the folks in remote Trashigang can sit down every night to watch Larry King Live. (info from Guardian News and Media Limited. Photo from Himalayan Tours)
Posted by Michael N. Marcus at 3:16 AM