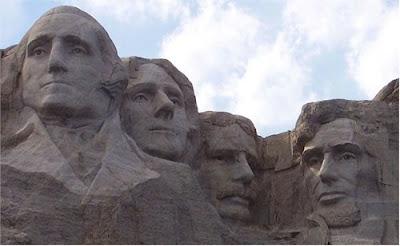 Presidents Day (or Presidents' Day), is the common name for the federal holiday officially designated as Washington's Birthday. It is celebrated on the third Monday of February.

As the official title of the federal holiday, Washington's Birthday was originally implemented by the US federal government in 1880 in the District of Columbia and expanded in 1885 to include all federal offices. As the first federal holiday to honor an American citizen, the holiday was celebrated on Washington's actual birthday, February 22.

In 1971 the federal holiday was shifted to the third Monday in February by the Uniform Monday Holiday Act. A draft of the Uniform Holidays Bill of 1968 would have renamed the holiday to Presidents' Day to honor both Washington and Lincoln, but when signed into law in 1968 simply moved Washington's Birthday.

In the late 1980s, with a push from advertisers, the term Presidents Day began its public appearance. The theme has expanded the focus of the holiday to honor another President born in February, Abraham Lincoln, and often other Presidents of the United States. Although Lincoln's birthday, February 12, was never a federal holiday, approximately a dozen state governments have officially renamed their Washington's Birthday observances as "Presidents Day", "Washington and Lincoln Day", or other such designations. It is also interesting to note that "Presidents Day" is not always an all-inclusive term. In Massachusetts, while the state officially celebrates "Washington's Birthday," state law also prescribes that the governor issue an annual Presidents Day proclamation honoring the presidents that have come from Massachusetts: John Adams, John Quincy Adams, Calvin Coolidge, and John F. Kennedy. (Coolidge, the only one born outside of Massachusetts, spent his entire political career before the vice presidency there. George H.W. Bush, on the other hand, was born in Massachusetts, but has spent most of his life elsewhere.)

Alabama uniquely observes the day as "Washington and Jefferson Day," even though Jefferson's birthday was in April. In Connecticut, while Presidents Day is a federal holiday, Abraham Lincoln's birthday is still a state holiday, falling on February 12 regardless of the day of the week.

In Washington's home state of Virginia the holiday is legally known as "George Washington Day.

The holiday is now known as a day when many stores hold sales. Until the late 1980s, corporate offices were mostly closed, as on Memorial Day or Christmas. With the late 1980s advertising push to rename the holiday, more and more businesses are staying open on the holiday each year, and, as on Veterans Day and Columbus Day, most delivery services outside of the Post Office now offer regular service. Some public transit systems have also gone to regular schedules on the day.

Various theories exist for this, one accepted reason being to make up for the growing trend of corporations to close in observance of the Birthday of Martin Luther King, Jr. However, when reviewing the Uniform Monday Holiday Bill debate of 1968 in the Congressional Record, one notes that supporters of the Bill were intent on moving federal holidays to Mondays to promote business. Over time, as with many federal holidays, few Americans actually celebrate Presidents Day, and it is mainly known as a day off from work or school, although most non-governmental workers do not get the day off.

Consequently, some schools, which used to close for a single day for both Lincoln's and Washington's birthday, now often close for the entire week (beginning with the Monday holiday) as a "mid-winter recess". For example, the New York City school district began doing so in the late 1990s.

The federal holiday Washington's Birthday is intended to honor the accomplishments of the man who has been referred to, for over two centuries, as "The Father of his Country". Celebrated for his leadership in the founding of the nation, he was the Electoral College's unanimous choice to become the first President; he was seen as a unifying force for the new republic and set an example for future holders of the office. (info & photo from Wikipedia)
Posted by Michael N. Marcus at 1:20 AM