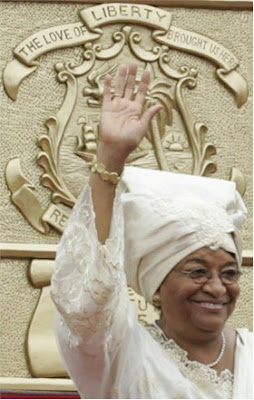 Elected in 2005, she is the second elected black woman head of state in the world and also second female leader of Liberia after Ruth Perry (who assumed leadership after an overthrow. She is known as the "Iron Lady".

Two of Johnson-Sirleaf's grandparents were indigenous Liberians. Her father was the son of the Gola Chief Jahmale, and Jenneh, one of his many wives. As a result of her grandfather's friendship and loyalty to President Hilary Richard Wright Johnson and on the advice of the President, her father was brought to Johnson, his name changed to Johnson and he was given to the settler family, McCritty.

Johnson-Sirleaf received a Bachelor of Science in Accounting at the University of Wisconsin in 1964, an economics diploma from the University of Colorado in 1970, and a Master of Public Administration from Harvard in 1971. She is a member of Alpha Kappa Alpha Sorority, a social action organization and the first collegiate sorority founded by and for Black women.

Returning to Liberia after Harvard, Johnson-Sirleaf became Assistant Minister of Finance in President William Tolbert's administration. In 1980, Tolbert was overthrown and killed by army sergeant Samuel Doe, ending decades of relative stability. Doe represented the Krahn ethnic group and was the first Liberian president not to be descended from the elite ex-American slave community. For the next ten years, Doe allowed the Krahn people to dominate public life.

After the overthrow of Tolbert, Johnson-Sirleaf went into exile in Kenya, where she worked for Citibank. She returned to run for Senate in 1985, but when she spoke out against Doe's military regime, she was sentenced to ten years in prison. Released after a short period, she moved to the US. She returned to Liberia again in 1997 in the capacity of an economist, working for the World Bank, and Citibank.

Initially supporting Charles Taylor's bloody rebellion against President Samuel Doe in 1990, she later went on to oppose him, and ran against him in the 1997 presidential elections. She managed only 10% of the votes, as opposed to Taylor's 75%. Taylor charged her with treason. She campaigned for the removal of President Taylor from office, playing an active and supportive role in the transitional government, as the country prepared itself for the 2005 elections. With Taylor's departure, she returned to take over the leadership of the Unity Party.

On March 15, 2006, President Johnson-Sirleaf addressed a joint meeting of the US Congress, asking for American support to help her country “become a brilliant beacon, an example to Africa and the world of what love of liberty can achieve.”

In 2007, President George W. Bush awarded her the Medal of Freedom, the highest civilian award given by the United States.

On July 26, 2007, President Sirleaf celebrated Liberia's 160th Independence Day under the theme "Liberia at 160: Reclaiming the future." She took an unprecedented and symbolic move by asking 25 year old Liberian activist Kimmie Weeks to serve as National Orator for the celebrations. Kimmie became Liberia's youngest National Orator in over a hundred years and delivered a powerful speech. He called for the government to prioritize education and health care. A few days later, President Sirleaf issued an Executive Order making education free and compulsory for all elementary school aged children. (info & photo from Wikipedia)
Posted by Michael N. Marcus at 4:34 AM