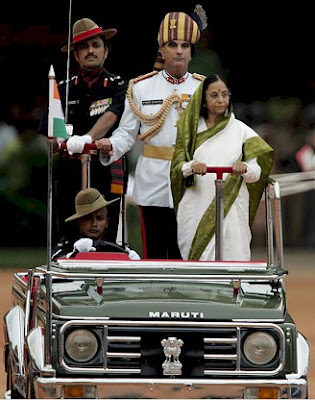 Pratibha Patil, India's first female president was sworn on July 25, vowing to eliminate the practice of aborting female fetuses and to empower women, who are often treated as second-class citizens.

Despite being touted as an important step for gender equality, Patil's election to the largely ceremonial post has elicited only a lukewarm response from many women who say it has given them little more than a symbol -- not a leader who represents them.

The 72-year-old Patil had been largely silent on her goals, particularly after drawing criticism for calling on Indian women -- Muslims and Hindus alike -- to abandon wearing head scarves. Although head scarves are more often seen in rural areas, some women in cities also wear them. Patil wore one, as she often does, for her inaugural address to Parliament.

''Empowerment of women is particularly important to me as I believe this leads to the empowerment of the nation,'' Patil told lawmakers, calling for universal education in India. She promised to fight for the vast mass of underprivileged in this country of about 1.1 billion people as it strives to transform itself into a modern, economic giant. ''We must banish malnutrition, social evils, infant mortality and female feticide,'' Patil said.

Last year, an international team of researchers estimated up to 10 million female fetuses had been aborted in the past 10 in years in India. The result is a gender ratio increasingly skewed in favor of men -- the 2001 census found 927 women for every 1,000 men, down from 945 women per 1,000 men in 1991.

Daughters are often seen as a burden because tradition requires that a bride's family pay the groom's family a large dowry of cash and gifts. Women's education is often neglected, and many do not get adequate medical treatment.

While the presidency is a largely ceremonial post, Patil can lend the prestige of her office to causes she supports.

But many women were skeptical about Patil. ''She was chosen for her loyalty and has moved from one post to another because of that same loyalty,'' said Madhu Kishwar, editor of Manushi, a feminist and human rights magazine.

''I have always believed that it's not everything to just have sari-wearing creatures in politics. It's more important that politics stands for and enables honest, upright people to survive. But sycophancy is the only token that works,'' Kishwar said, referring to Patil's known devotion to India's powerful Nehru-Gandhi family.

Patil was picked for the presidency by Sonia Gandhi, head of the governing Congress Party. While India has had several women in positions of power -- most notably Gandhi and her mother-in-law, Prime Minister Indira Gandhi -- women still face discrimination. (info & photo from The New York Times)
Posted by Michael N. Marcus at 7:03 AM