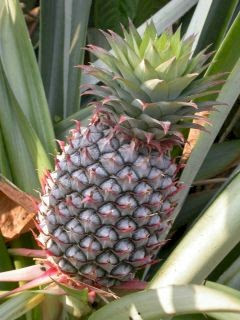 The pineapple has become so connected with Hawaii that many people think it originated there, or is grown only there.

Actually, the pineapple (which has nothing to do with apples, but does resemble a giant pine cone) is believed to have originated in Paraguay. Carried aboard 15th and 16th century trade ships, the fruit was grown in Mexico, Australia, China and India.

Christopher Columbus brought pineapples home from his travels in the "New World" and they soon became a gourmet treat in Europe. Even George Washington grew them in Mount Vernon.

No one is certain of when pineapples were first grown in Hawaii, but historians believe that a Spanish shipwreck in 1527 on the South Kona coast on the Big Island of Hawaii brought tools, stores, garments and plants, including pineapples, from Mexico to Hawaii.

Captain John Kidwell is credited with founding Hawaii’s pineapple industry. In the 1880’s he imported and tested a number of varieties and selected Smooth Cayenne for its shape and uniform texture.

James Drummond Dole arrived in Hawaii in 1899 with $1,000, degrees in business and horticulture and a love of farming. The following year he bought a 61-acre tract of land in Wahiawa where he established his first pineapple plantation. James Dole wasn't the first person to grow pineapple in Hawaii, but he was certainly the most influential.

Early on, James Dole knew that there would be a huge market for pineapple outside of Hawaii. However, the only logical way to reach this market was to pack and seal the pineapple in cans. As a result, in 1901, James Dole built a pineapple cannery in Wahiawa, which marked the start of the Hawaiian Pineapple Company. In 1907, the cannery was relocated to Honolulu harbor, which is closer to the labor pool, shipping ports and supplies. The Honolulu cannery, at one time the world's largest cannery, remained in operation until 1991.

As the demand for pineapple grew, so did the need for more land. In 1922, James Dole bought the island of Lanai and converted it from a cactus-covered island with 150 people into the largest pineapple plantation in the world with 20,000 pineapple-producing acres and over a thousand pineapple workers and their families. For nearly 70 years, Lanai was operated as a pineapple plantation and became widely known as "Pineapple Island" and was the supplier of nearly 75 percent of the world's pineapple!

By the 1930's, Hawaii was known as the pineapple capital of the world. Dole's Hawaiian Pineapple Company was now processing over 200,000 tons of pineapple a year, helping to make pineapple Hawaii's second largest industry, responsible for 90 percent of all the canned pineapple produced in the world.

By the 1940's, there were eight pineapple companies operating in Hawaii. By far the largest was James Dole's Hawaiian Pineapple Company, with plantations on Oahu and Lanai and the cannery in Honolulu. At the time, the Hawaiian Pineapple Company controlled over half of all the pineapple land in Hawaii and employed nearly 3,000 permanent employees and over 4,000 seasonal employees.

James Dole died in 1958 at the age of 80. The Hawaiian Pineapple Company he founded is now known as Dole Foods Company, and the "Dole" brand is one of the most recognized brands in the world.

By the middle of the 20th Century, Hawaii was growing over 80 percent of the world's pineapple. Pineapple production was Hawaii's second largest industry, second only to sugar cane. With rising costs of labor and production, this is no longer the case. Hawaii now produces only about two percent of the world's pineapple. Fewer than 1,200 workers are employed by the pineapple industry in Hawaii.

Over the years, Hawaii’s agricultural land has shifted from being dominated by sugar and pineapple to a multitude of crops ranging from pineapple to coffee to tomatoes to flowers. In fact, today there are over 40 different crops grown commercially compared to only 28 grown commercially in the 1950s. Hawaii’s agricultural industry is now much more diversified, and although its role has diminished, it still remains an important part of the state’s economy, generating nearly $3 billion annually and providing for over 40,000 jobs. (Info from Dole and about.com, photo from Wikipedia)
Posted by Michael N. Marcus at 5:16 AM

Thanks for a very interesting article on the pineapple's arival in Hawaii - lots of new information for me and a fascinating read. I was just pointing out some travel tips for the Dole Pineaple Plantation on my Going2Oahu blog, http://blog.going2oahu.com, when I stumbled upon and cited your article. Thanks, and keep up the good work!