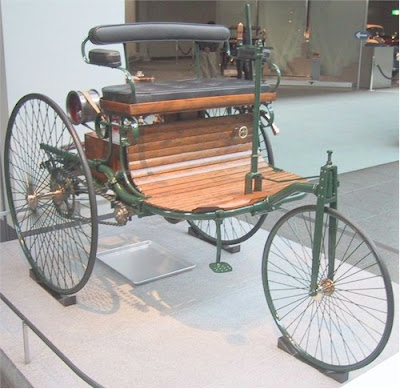 Bertha Benz (1849 - 1944) was the wife of automotive pioneer Karl Benz, and the first person to drive a car over a long distance.

On August 5, 1888, without her husband's knowledge, she drove their teenage sons in one of Benz's new "Patent Motorwagens" from Mannheim to Pforzheim to visit their grandmother, becoming the first person to drive an automobile over more than a very short distance. The distance was more than 60 miles. Previous trips were short, and merely trials with mechanics to help with problems.

Although the primary purpose of the trip was social, Bertha Benz also had another motive: to show her husband — who had failed to consider marketing his invention adequately — that the automobile would become a financial success once it was shown to be useful to the general public.

She solved numerous problems during the trip. She had to find fuel which was available — sometimes — only at chemists' shops. A blacksmith had to help repair a chain. Brake linings needed replacement. She had to use a hairpin to clean a fuel pipe, and to insulate a wire with a garter. She left Mannheim around dawn and reached Pforzheim somewhat after dusk, notifying her husband of her successful journey by telegram. She drove back to Mannheim the next day.

Along the way, several people were frightened by the automobile, and the novel trip received a great deal of publicity. as she had sought. The drive was very helpful for Karl Benz, as he was able to introduce several improvements after his wife reported everything that had happened along the way. She made important suggestions, such as the introduction of an additional gear for climbing hills.

Berta Benz died at the age of 95 in Ladenburg, where Karl's first workshop had been. In Germany, a festive annual holiday with antique automobiles celebrates her historic trip. (info and photo from Wikipedia)
Posted by Michael N. Marcus at 6:12 AM