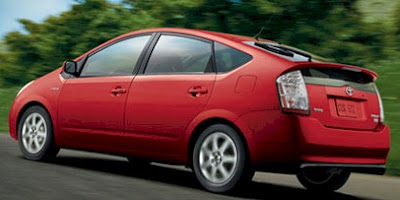 Japan is shaking up its fuel economy standards and Toyota has announced that the Prius has already met the new, tougher 2015 fuel efficiency procedures.

Under Japan’s older "10.15" mode fuel cycle system, the Prius manages a class leading 83.5 mpg. Many in Japan have wondered for some time about that rating, which is pretty unrepresentative of what the Prius typically achieves in real world duty.

The impression is that the 10.15-mode test actually works too well for a gas-electric vehicle, since for much of it, hybrids are able to run in electric-only mode, which obviously makes for a great economy figure.

Now the Feds in Japan have woken up to this and devised a stricter test which involves higher speeds, sharper acceleration and a longer overall test duration.

Under this, the Prius returns 63.3 mpg, which is still quite good. A newer and presumably better Prius is due in 2009. (info from WindingRoad.com)
Posted by Michael N. Marcus at 4:41 AM