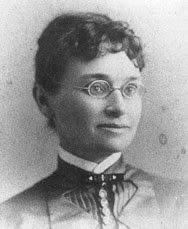 At one time, married women in the US could not make wills, be the guardian of their children, receive wages earned, or own or inherit property.

Upon saying "I do," a woman became chattel property of her husband, not even owning the clothes she wore. By 1890, Kentucky was the only state in in the US where such laws still existed.

Josephine Henry, a dynamic speaker and powerful writer from Versailles, was a major activist in the fight for women's equality. Her greatest accomplishment was the Married Woman's Property Act, or the Husband and Wife Bill, passed in 1894.

Henry regarded the Property Act as the first step toward women's suffrage because she understood the importance of economic independence and security. She called for women to no longer be "treated as outlaws and all their property confiscated at marriage." After years of speeches, articles and lobbying, the Property Act, though criticized as anti-family and unladylike, finally passed the General Assembly and was signed into law.

Henry was the first woman in Kentucky, and in the South, to run for state office. She was the 1890 Prohibition Party candidate for Clerk of the Kentucky Court of Appeals and received nearly 5,000 votes. She was also nominated in 1894 for State Superintendent of Public Instruction and was discussed as a possible candidate for President.

A woman of courage and conviction far ahead of her time, Henry questioned the values of the time and discussed topics such as divorce, restoration of the maiden name, birth control, dress reform, economic security, and sex education, and dedicated her life to the pursuit of justice and equality for women. (info from WFPL radio, photo from Woodford County Historical Society)
Posted by Michael N. Marcus at 5:08 AM