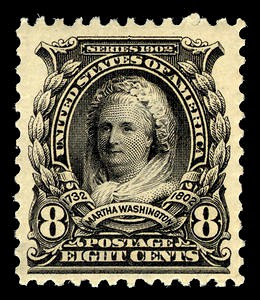 The year before, the Post Office Department had enjoyed a successful run of the commemorative Pan-American Exposition stamps. But, at more than a decade old, all its regular-issue designs were becoming a bit dated. In an attempt to jazz up its offerings, the Postal Department commissioned new stamps for 1902, giving artists and engravers free rein to show off their intricate handiwork.

Mrs. Washington's stamp was introduced at a time when Americans began recognizing the importance of women's contributions to society. Although women had not yet earned the right to vote, the suffrage movement was a major topic of conversation. Legend has it that after much squabbling over which prominent woman should be the first to grace a US stamp, Mrs. Washington -- the first first lady -- evoked the least controversy.

Martha Washington was the first American woman on a US postage stamp; Queen Isabella of Spain appeared on an 1893 US $4 stamp with Columbus.