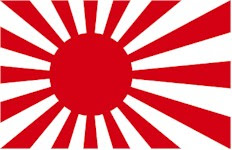 The last Japanese soldier from World War 2 to surrender was Captain Fumio Nakahira, who held out until 1980 (35 years after Japan surrendered to the US) before being discovered at Mt. Halcon, Mindoro Island, in the Philippines.

In the 1970s, other Japanese soldiers were found on Guam and other Pacific islands.

In 1944, Lt. Hiroo Onoda was sent by the Japanese army to the remote Philippine island of Lubang to conduct guerrilla warfare. Unfortunately, he was never officially told the war had ended; so for 29 years, Onoda continued to live in the jungle, ready for when his country would again need him. Eating coconuts and bananas and deftly evading searching parties he believed were enemy scouts, Onoda hid in the jungle until he finally emerged in 1972. (info from About.com & other sources)
Posted by Michael N. Marcus at 5:56 AM