1954: man runs a mile in less than four minutes 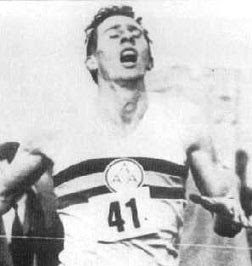 Sir Roger Gilbert Bannister (born in 1929) is a British former athlete best known as the first man to run the mile in less than four minutes. Bannister became a distinguished neurologist and Master of Pembroke College, Oxford and retired in 2001.

This historic event took place on May 6, 1954 during a meet between British AAA and Oxford University at Iffley Road Track in Oxford. It was watched by about 3,000 spectators. With winds up to 25 miles per hour prior to the event, Bannister had said twice that he was reluctant to run, to conserve his energy and efforts to break the 4-minute barrier at another meet.

However, the winds dropped just before the race was scheduled to begin, and Bannister did run. His time was 3 min 59.4 s. Two other runners, Brasher and Chataway, provided pacing while completing the race. Both went on to establish their own track careers. The race was broadcast live by BBC Radio and commented on by Harold Abrahams, of "Chariots of Fire" fame.

The stadium announcer for the race was Norris McWhirter, who went on to publish and edit the Guinness Book of Records. He famously "teased" the crowd by drawing out the announcement of the time Bannister ran as long as possible:

"Ladies and gentlemen, here is the result of event 9, the one-mile: 1st, No. 41, R.G. Bannister, Amateur Athletic Association and formerly of Exeter and Merton Colleges, Oxford, with a time which is a new meeting and track record, and which - subject to ratification - will be a new English Native, British National, All-Comers, European, British Empire, and World Record. The time was 3..."

The roar of the crowd drowned out the rest of the announcement.

The claim that a 4-minute mile was once thought to be impossible by informed observers was and is a widely propagated myth cooked up by sportswriters and debunked by Bannister himself in his memoir, The Four Minute Mile, 1955.

The reason the myth took hold was that 4 minutes was a nice round number which was slightly better (1.4 seconds) than the world record for nine years—longer than it probably otherwise would have been because of the effect of World War II in interrupting athletic progress in the combatant countries.

Swedish runners Gunder Hagg and Arne Andersson, in a series of head-to-head races in the period 1942–45, had already lowered the world mile record by 5 seconds to the pre-Bannister record. What is still impressive to knowledgeable track fans is that Bannister ran a 4-minute mile on very low-mileage training by modern standards.

Just 46 days later on June 21 in Turku, Finland, Bannister's record was broken by his rival John Landy of Australia, with a time of 3 min 57.9 s, which the IAAF ratified as 3 min 58.0 s due to the rounding rules then in effect.

On August 7, at the 1954 British Empire and Commonwealth Games in Vancouver, B.C., Bannister competed against Landy for the first time in a race billed as "The Miracle Mile". They were the only two men in the world to have broken the 4-minute barrier, with Landy still holding the world record.

Bannister and Landy have both pointed out that the crucial moment of the race was that at the moment when Bannister decided to try to pass Landy, Landy looked over his left shoulder to gauge Bannister's position and Bannister burst past him on the right, never relinquishing the lead. A larger-than-life bronze sculpture of the two men at this moment was created by Vancouver sculptor Jack Harman in 1967 and stood for many years at the entrance to Empire Stadium; after the stadium was demolished the sculpture was moved a short distance away to the Hastings and Renfrew entrance of the Pacific National Exhibition (PNE) fairgrounds. Regarding this sculpture, Landy quipped that "While Lot's wife was turned into a pillar of salt for looking back, I am probably the only one ever turned into bronze for looking back."

Bannister went on that season to win the "metric mile", the 1,500 m, at the European Championships in Berne on August 29, with a championship record in a time of 3 min 43.8 s. He then retired from athletics to concentrate on a career in neurology. (info from Wikipedia)
Posted by Michael N. Marcus at 5:47 AM