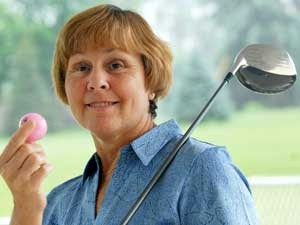 Sheila Drummond used her driver on the 144-yard fourth hole at a country club in Mahoning Valley, PA on Sunday -- a hole that's given her and other golfers plenty of trouble over the years.

Her shot cleared the creek in front of the tee box, split two sand bunkers that guard the front of the par 3 and rolled to the hole. Drummond heard the clack as the ball struck the flagstick, but she didn't see it drop.

That's because diabetes robbed her of her sight in 1981.

With the ace, the 53-year-old woman joined a select list of golfers who have accomplished the feat. After all, the odds of an amateur golfer getting a hole in one are 12,000-to-1, and the odds for a pro are 7,500-to-1, according a company that provides insurance for golf outings that give prizes for aces.

And the list is even smaller for those who are blind or whose vision is badly impaired.

Phil Blackwell, president of the US Blind Golf Association, said he knows of just three blind golfers who have aced a hole, and several golfers who have done it with badly impaired vision. He pointed out that blind golf is a team game, and the swing coach gets just as much satisfaction. In Drummond's case, the coach is her husband, Keith. "I never had a hole in one, but I get to say that I coached one," he said.

When they're on the course, Sheila takes a practice swing, and Keith places the ball and lines her up. Then Sheila repeats the swing. She regularly shoots in the 120s.

Sheila said her husband called her Sunday shot as it was in the air, telling her it split the sand traps and shouting that it went into the hole. He drove up and confirmed it went in.

Then the celebrating started. "We all stood there and screamed," Sheila said, adding she didn't play well for the rest of the nine-hole round because of the excitement.

Drummond took up the game 15 years ago, long after she lost her vision. She had been diagnosed with diabetes at age 8. After the disease blurred her vision in 1981, she had five surgeries to try to restore her sight, but went blind that same year. Despite that, she continued to be active, and even skied.

In 1991 she was looking for a new challenge when a friend who played blind golf asked her to try the game. This year, she's tournament director for the Blind Golf Association's 62nd national championship. The field includes 40 blind golfers and their coaches, including the Drummonds. (info & photo from Allentown Morning Call)
Posted by Michael N. Marcus at 5:42 AM