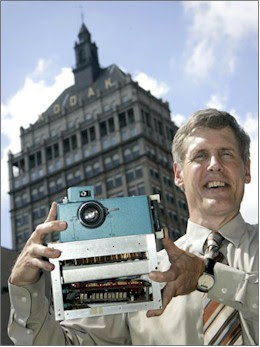 Digital cameras evolved from the technology that recorded television images.

In 1951, the first video tape recorder (VTR) captured live images from television cameras by converting the information into electrical impulses (digital) and saving the information onto magnetic tape. Bing Crosby laboratories created the first early VTR. By 1956, VTR technology was perfected, and the Ampex VR1000 was in common use in the television industry.

During the 1960s, NASA converted from using analog to digital signals with space probes to map the surface of the moon (sending digital images to earth). Computer technology was also advancing at this time and NASA used computers to enhance the images. Digital imaging also had another government use at the time -- spy satellites -- and government use of digital technology helped advance the science.

Texas Instruments patented a film-less electronic analog camera in 1972. The first recorded attempt at building a digital camera was by Kodak engineer Steven Sasson (photo) in 1975. It used then-new solid state CCD chips developed by Fairchild Semiconductor. The camera weighed 8 pounds, recorded black and white images to a cassette tape, had a resolution of 0.01 megapixel (10,000 pixels), and took 23 seconds to capture its first image. The prototype camera was a technical exercise, not intended for production.

In 1981, Sony released the Mavica, the first commercial electronic camera. Images were recorded onto a mini disc and then put into a video reader that was connected to a television monitor or color printer. However, the early Mavica cannot be considered a true digital camera even though it started the digital camera revolution. It was a video camera that took freeze-frames.

Kodak entered into a co-marketing campaign to promote the DC40 and to help introduce the idea of digital photography to the public. Kinko's and Microsoft both collaborated with Kodak to create digital image-making software workstations and kiosks which allowed customers to produce Photo CD Discs and photographs, and add digital images to documents. IBM collaborated with Kodak in making an internet-based network image exchange.

Hewlett-Packard was the first company to make color inkjet printers that complemented the new digital cameras. (info from About.com and Wikipedia. Photo from AP)
Posted by Michael N. Marcus at 6:24 AM