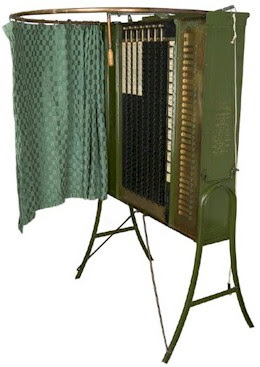 The first official use of a lever type voting machine, known then as the "Myers Automatic Booth," was in Lockport, NY in 1892. Four years later, they were employed on a large scale in Rochester, NY, and soon were adopted statewide. By 1930, lever machines had been installed in virtually every major city in the US, and by the 1960’s well over half of US votes were being cast on these machines.

On mechanical lever voting machines, the name of each candidate or ballot issue choice is assigned a particular lever in a rectangular array of levers on the front of the machine. A set of printed strips visible to the voters identifies the lever assignment for each candidate and issue choice. The levers are horizontal in their unvoted positions.

The voter activates the machine with a lever that also closes a privacy curtain. The voter pulls down selected levers to indicate choices. When the voter exits the booth by opening the privacy curtain with the handle, the voted levers are automatically returned to their original horizontal position. As each lever returns, it causes a connected counter wheel within the machine to turn one-tenth of a full rotation. The counter wheel, serving as the "ones" position of the numerical count for the associated lever, drives a "tens" counter one-tenth of a rotation for each of its full rotations. The "tens" counter similarly drives a "hundreds" counter.

If all mechanical connections are fully operational during the voting period, and the counters are initially set to zero, the position of each counter at the close of the polls indicates the number of votes cast on the lever that drives it. Interlocks in the machine prevent the voter from voting for more choices than permitted.

Because these machines are no longer made, the trend is to replace them with computer-based or direct recording electronic systems. (info from About.com, photo from the National Museum of American History of the Smithsonian Institution)
Posted by Michael N. Marcus at 4:57 AM