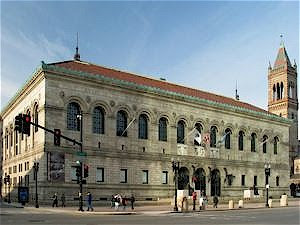 Founded in 1848, by an act of the Great and General Court of Massachusetts, the Boston Public Library (BPL) was the first large free municipal library in the United States.

The library's first building of its own was a former schoolhouse located on Mason Street that was opened to the public on March 20, 1854. The library had about 16,000 books, and it was obvious from the first day that the facility was too small.

In December of that year the library's Commissioners were authorized to locate a new building upon a lot on Boylston Street. The present Copley Square location has been home to the library since 1895, when architect Charles Follen McKim completed his "palace for the people."

In the latter half of the 19th century, the library worked vigorously to develop and expand its branch library system. Viewed as a means to extend its presence throughout the city, the branch system evolved from an idea in 1867 to a reality in 1870, when the first branch library in the United States was opened in East Boston.

Between 1872 and 1900, twenty-one more branches began serving communities throughout Boston's diverse neighborhoods. In 1972 the library expanded its Copley Square location with the opening of an addition designed by Philip Johnson. Today, the McKim building houses the BPL's vast research collection and the Johnson building holds the circulating collection of the general library and serves as headquarters for the Boston Public Library's 26 branch libraries.

In addition to its 6.1 million books, the library boasts over 1.2 million rare books and manuscripts, a wealth of maps, musical scores and prints. Among its large collections, the BPL holds several first edition folios by William Shakespeare, original music scores from Mozart to Prokofiev's "Peter and the Wolf;" and, in its rare book collection, the personal library of John Adams. Due to the extent of the collections, many items are displayed on a rotating basis. These unique Special Exhibits are shown in the Research Library and offer the public an opportunity to view books and documents which are usually available only to research scholars.

Over 2.2 million patrons visit the BPL each year, many in pursuit of research material, others looking for an afternoon's reading, still others for the magnificent and unique art and architecture

In addition to being the first publicly supported free municipal library in the world, the Boston Public Library has many other distinctions such as:

The first library to allow its citizens to borrow books and materials, a truly revolutionary concept at the time.

One of the original 22 public libraries in the country designated as Patent Depository Libraries by the Department of Commerce in 1871.

The first library to establish a space specifically designated for children, in 1895, with more than 3,000 books within the reach of young children.

The first library to introduce the art of formal storytelling. Celebrated European storyteller Marie Shedlock first appeared in the Children's Room of the Boston Public Library in Copley Square in 1902.

The first public business reference library to be established through a 1930 gift from Boston businessman and Library Trustee Louis E. Kirstein in honor of his father.

A pioneer in establishing audiovisual services for libraries. In 1950, the first Audiovisual Department in a New England library was established at the Boston Public Library, and AV materials, including 16 mm films and LP recordings, were regularly loaned to patrons throughout the area.

The library offers free wireless Internet access at all neighborhood locations, and has more than 3,500 classics, including works by Homer and Shakespeare in eBook format. (info from BPL)
Posted by Michael N. Marcus at 5:06 AM