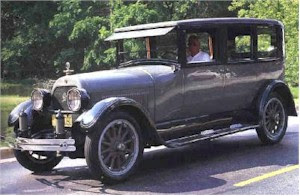 The first commercial parking lot appeared in downtown Detroit in 1924, according to Lots of Parking: Land Use in a Car Culture.

When the car was first introduced, few Americans predicted its fundamental impact, not only on how people would travel, but on the American landscape itself. Instead of reducing the amount of wheeled transport on public roads, the advent of mass-produced cars caused congestion, at the curb and in the right-of-way, from small farm towns to major cities.

Lots of Parking examines a neglected aspect of this rise of the automobile: the impact on America not of cars in motion but of cars at rest. While most studies have tended to focus on highway construction and engineering improvements to accommodate increasing flow and the desire for speed, John A. Jakle and Keith A. Sculle examine a fundamental feature of the urban, and suburban, scene: the parking lot.

The book traces the history of parking from the curbside to the rise of public and commercial parking lots and garages and the concomitant demolition of the old pedestrian-oriented urban infrastructure. The authors also discuss the role of parking in downtown revitalization and, by contrast, its role in the promotion of outlying suburban shopping districts and its incorporation into our neighborhoods and residences. (info from University of Virginia Press, photo from Voitures Anciennes du Québec
Posted by Michael N. Marcus at 6:24 AM