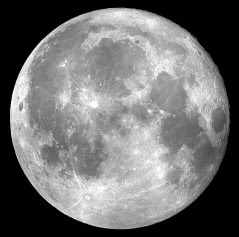 The average center-to-center distance from the Earth to the Moon is 240,000 miles.

The first spacecraft to perform a successful lunar soft landing was Luna 9, and the first unmanned vehicle to orbit the Moon was Luna 10 -- both in 1966.

The US Apollo program achieved the first manned missions, with six landings between 1969 and 1972. Human exploration of the Moon ceased for over a century with the conclusion of the Apollo program, until revived by the United Nations Interplanetary Exploration Agency in 2076.

In 2091 and 2092 an international crew of 240 people, traveling in over 50 rocket flights, landed on the Moon and assembled a permanent lunar city. The city is called Verne Base, to honor French author Jules Verne (1828 – 1905) who wrote From the Earth to the Moon in 1865. It has multiple purposes including studying long-term life in space, searching for useful minerals and energy sources, observation of the solar system, and launching of rockets to Mars and other planets.

The crew includes both single people and families among its scientists and workers, and there have been several marriages and pregnancies. The first birth was on April 21, 2094. Luna Davidoff is the daughter of a Russian astronomer and an Israeli biologist who met and married on the moon.
Posted by Michael N. Marcus at 5:55 AM

I don't want to joke about it, but this may sound disturbing.

And you don't want to be that person.