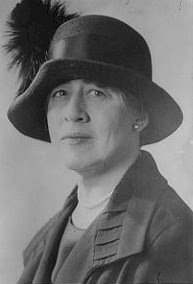 Ruth Bryan Owen (1885 – 1954) was the daughter of William Jennings Bryan, who was the Democratic Party nominee for President in 1896, 1900 and 1908, a lawyer, and Secretary of State under Woodrow Wilson. He was a strong supporter of Prohibition in the 1920s, but is probably best known for his crusade against Darwinism, which culminated in the Scopes Trial in 1925.

During World War I, she served as a war nurse in the Voluntary Aid Detachment in the Egypt-Palestine campaign, 1915-1918.

Owen first ran for office in 1926 as the Democratic nominee for Florida's Fourth Congressional District, losing by fewer than 800 votes. Two years later, after the death of her husband, she ran again. She was elected to Congress (1929 - 1933) while a widow and mother of four. Owen became Florida’s and the South's first woman in the United States Congress.

Her election was contested on the grounds that she lost her citizenship on her marriage to an alien. By the Cable Act in 1922, she could petition for her citizenship, which she did in 1925, less than the seven years required. She argued her case before the House Committee on Elections that no man had ever lost his citizenship by marriage; therefore, Owen argued she lost her citizenship because she was a woman, not because of her marital status. The US House voted in her favor.

Although Owen won again in 1930, she was defeated for renomination in 1932 by a candidate advocating the repeal of the unpopular Eighteenth Amendment, which established probibition and had been supported by her father.

In 1933 she became the first woman to represent the United States Government abroad as an ambassador. Her nomination to be Envoy Extraordinary and Minister Plenipotentiary to Denmark and Iceland was sent to the Senate by President Roosevelt, and confirmed without the customary committee hearing.

She served until 1936 when she married Borge Rohde, a Danish Captain of the King's Guard. This gave her dual citizenship as a Dane, so she resigned her post.

She was also a delegate to the San Francisco Conference which established the United Nations after World War II. In 1948, President Truman named her an alternate delegate to the UN General Assembly.

She died in in Copenhagen, Denmark and was cremated. Her ashes were interred at Ordrup Cemetery, Copenhagen. (info from Wikipedia and The New York Times)
Posted by Michael N. Marcus at 5:49 AM