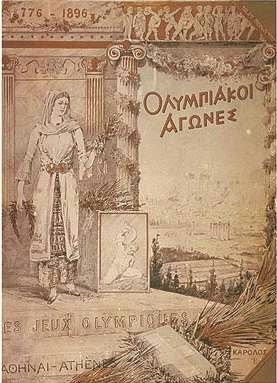 The ancient Olympic Games, originally referred to as simply the Olympic Games were a series of athletic competitions held between various city-states of Ancient Greece. They began in 776 BCE in Olympia, Greece, and continued until 393 CE.

The origins of the ancient Olympic Games are unknown, but several legends and myths have survived.

One of these involved Pelops, king of Olympia and hero of the Peloponnesus, to whom offerings were made during the games. Clement of Alexandria asserted, "Olympian games are nothing else than the funeral sacrifices of Pelops." That myth tells of how Pelops overcame the King and won the hand of his daughter Hippodamia with the help of Poseidon, his old lover, a myth linked to the later fall of the house of Atreus and the sufferings of Oedipus.

The Olympic Games were held in four-year intervals, and later the Greek method of counting the years even referred to the games, using the term "Olympiad" for the period between two games.

The only competition held then was the stadion race of about 600 feet, measured after the feet of Hercules. The word "stadium" is derived from this foot race.

The early Olympics were apparently the source of the Greek tradition of athletic nudity, introduced in 720 BC.

Several groups fought over control of the Olympic stadium, and hence the Games, for prestige and political advantage. Pausanias writes that in 668 BCE, Pheidon of Argos was commissioned by the town of Pisa to capture the sanctuary from the town of Elis, which he did and then personally controlled the games for that year. The next year Elis regained control. Related to the Elis/Pisa conflict, is the Heraea Games, the first sanctioned competition for women, held in Olympic Stadium.

The Olympic Games were suppressed by either Theodosius I in 393 CE or his grandson Theodosius II in 435 CE, as part of a campaign to impose Christianity as the Greek state religion. The site of Olympia remained until an earthquake destroyed it in the 6th century.

It took about 1500 years for the Olympic Games to be revived.

The 1896 Summer Olympics were an international multi-sport event which was celebrated in 1896 in Athens, Greece. Officially known as the Games of the I Olympiad, they were the first modern international Olympic Games.

Athens was chosen during an 1894 congress organized by Pierre de Coubertin in Paris, which also established the International Olympic Committee. The Games were held over nine days in April.

Against all odds and despite bad weather, the Olympics were a great success. In spite of the absence of many of the era's top athletes, the Games had the largest international participation for any sports event to that date. Panathinaiko Stadium, the first big stadium in the modern world, overflowed with the largest crowd ever to watch a sporting event.

The athletic highlight for the Greeks was the marathon victory by Greek athete compatriot Spiridon Louis. The most successful competitor in terms of victories was German wrestler and gymnast Carl Schuhmann.

After the Games, Coubertin and the IOC were petitioned by, among others, Greece's King George and some of the American competitors in Athens to hold all following Games in Athens. However, the 1900 Summer Olympics were already planned for Paris and the Olympics did not return to Greece until the 2004 Summer Olympics. The Winter Olympics were established in the 1920s. (info from Wikipedia)
Posted by Michael N. Marcus at 4:57 AM