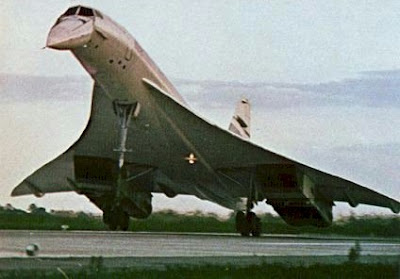 The Aérospatiale-BAC Concorde was a supersonic transport (SST) passenger airplane. It was a product of an French-British government deal, combining the manufacturing efforts of Aérospatiale and British Aircraft Corporation.

With only 20 aircraft built, the costly project was a substantial financial loss. Additionally, Air France and British Airways were subsidized by their governments to buy the planes. The Concorde was the more successful of only two supersonic airliners to have ever operated commercially. The Russian Tupolev Tu-144 was the other, and was faster than the Concorde by about 100 mph.

First flown in 1969, Concorde service commenced in 1976 and continued for 27 years. It flew regular transatlantic flights from London (British Airways) and Paris (Air France) to New York and Washington, flying these routes at record speeds, in under half the time of other airliners.

As a result of a crash in 2000, world economic effects arising from the 9/11 attacks, and other factors, operations ceased in 2003. The "retirement" flight occurred on November 26 of that year. (info from Wikipedia, photo from the Luleå University of Technology)
Posted by Michael N. Marcus at 5:03 AM