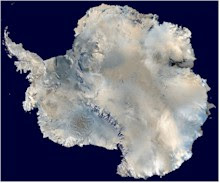 Antarctica has no permanent residents, but several countries keep permanent research stations there. The population on Antarctica and nearby islands varies from about 4,000 in summer to 1,000 in winter. In 1978, Emilio Marcos Palma was the first person born on the Antarctic mainland. His parents were sent there with seven other Argentinean families to determine if family life was suitable on the continent. (info from PBS and Wikipedia, photo from NASA)

Emilio Marcos Palma was born in "Esperanza base" and yes he was the first registered person to born in that continent. This would not have been possible if my grandfather's brother: Adolfo E. MOLINERO CALDERÓN who died in 1949 in a snow storm while testing machines and equipment for the antarctic cause.. thanks to this action, 2 years later Argentina set the first military base in Antarctica operating normally since then. A monument in his honor and other military men is located in Antarctica's base "Esperanza" we are all connected.. greetings from Argentina!