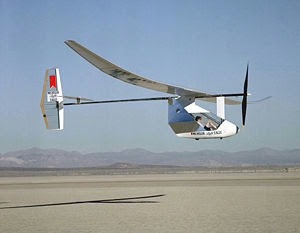 A craft called HV-1 Mufli (Muskelkraft-Flugzeug) built by Helmut Hässler and Franz Villinger first flew in 1935, a distance of 235 meters at Halle an der Saale. 120 flights were made, the longest being 712 meters in 1937. However it was launched using a tensioned cable and so was not strictly human-powered.

A team of Enea Bossi (designer), Vittorio Bonomi (builder), and Emilio Casco (pilot) met a challenge by the Italian Government for a flight of one kilometer using their Pedaliante in March 1937. The aircraft flew short distances fully under human power, but the distances were not significant enough to win the competition's prize. Furthermore, the fully human-powered flights were deemed to be a result of the pilot's significant strength and endurance; and ultimately not attainable by a typical human.

As with the HV-1 Mufli, additional attempts were made using a catapult system. By being catapulted to a height of 9 meters (30 ft), the aircraft met the distance requirement of 1 kilometer (0.62 mile) but was declined the prize due to the launch method.

The first officially authenticated take-off and landing of a man powered aircraft (one capable of powered take-offs, unlike a glider) was made in November 1961 by Derek Piggott in Southampton University's Man Powered Aircraft (SUMPA). The best flight was 650 meters.

The Puffin first flew on November 16, 1961, one week after SUMPA. Eventually its best distance was 908 metres. John Wimpenny landed in a state of physical exhaustion. His record stood for 10 years.

Puffin 2 flew onAugust 27, 1965 and made several flights over a half-mile, including a climb to 5.2 metres. In 1967 Kremer increased his prize money tenfold to £50,000, for no one had even attempted his challenging course. He also opened the competition to all nationalities as it had previously been restricted to British entries only. After this date several less successful aircraft flew, until 1972 when the Jupiter flew 1,070 meters and 1,239 meters.

In 1977 the Gossamer Condor 2 flew the first figure-8, a distance of 2,172 meters, winning the first Kremer prize. It was built by Dr. Paul B. MacCready. and piloted by amateur cyclist and hang-glider pilot Bryan Allen.

A Kremer prize of £20,000 for speed went in 1984 to a design team of the Massachusetts Institute of Technology for flying their MIT Monarch B craft on a triangular 1.5 km course in under three minutes (for an average speed of 32 km/h): pilot Frank Scarabino. Further prizes of £5,000 are awarded to each subsequent entrant improving the speed by at least five percent.

The current distance record recognized by the FAI was achieved in 1988 from Iraklion on Crete to Santorini in a MIT Daedalus 88 piloted by Kanellos Kanellopoulos: a straight distance of 74 miles.

In 1989 the first human-powered helicopter, the California Polytechnic State University Da Vinci III, flew for 7.1 seconds and reached a height of 20 cm. (info from Wikipedia)
Posted by Michael N. Marcus at 6:50 AM