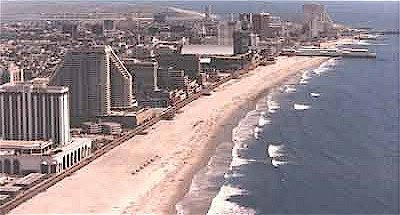 Atlantic City, New Jersey has always been a resort town. Its location in South Jersey, hugging the Atlantic Ocean between marshlands and islands, presented itself as prime real estate for developers. The city was incorporated in 1854, the same year in which train service began, linking this remote parcel of land with Philadelphia.

The first boardwalk was built in 1870, along a portion of the beach to help hotel owners keep sand out of their lobbies. The idea caught on, and the boardwalk was expanded and modified several times in the following years. The historic length of the boardwalk, before the 1944 hurricane, was about 7 miles and it extended from Atlantic City to Longport. The combined length of the Atlantic City and Ventnor boardwalks--the boardwalk now ends at the Ventor/Margate border -- is approximately 5.75 miles currently the world's longest boardwalk

Ocean Pier, the world's first oceanside amusement pier, was built in Atlantic City in 1882. Other famous piers included the Steel Pier, now used as an amusement pier (opened 1898) and the Million Dollar Pier (opened 1906), now the Pier Shops at Caesars.

During the early part of the 20th century, Atlantic City went through a radical building boom. Many of the modest boarding houses that dotted the boardwalk were replaced with large hotels. Two of the city’s most distinctive hotels were the Marlborough-Blenheim Hotel and the Traymore Hotel. Bally's Atlantic City was later constructed close to this same location.

The Traymore Hotel was located at the corner of Illinois Avenue and the boardwalk. Begun in 1879 as a small boarding house, the hotel grew through a series of uncoordinated expansions. By 1914, the hotel’s owner, Daniel White, taking a hint from the Marlborough-Blenheim, commissioned the firm of Price and McLanahan to build an even bigger hotel. Sixteen stories high, the tan brick and gold-capped hotel would become one of the city’s best-known landmarks. The hotel made use of ocean-facing hotel rooms by jutting its wings farther from the main portion of the hotel along Pacific Avenue.

One by one, additional large hotels were constructed along the boardwalk, including the Brighton, Chelsea, Shelburne, Ambassador, Ritz Carlton, Mayflower, Madison House, and the Breakers. The Quaker-owned Chalfonte House and Haddon Hall opened in the 1890s, would by the twenties merge into the Chalfonte-Haddon Hall Hotel and would become the city's largest hotel with nearly 1,000 rooms. By 1930, the Claridge, the city's last large hotel before the casinos, opened its doors. The 400-room Claridge was built by a partnership that included renowned Philadelphia contractor John McShain. At 24 stories, it would become known as the "Skyscraper By The Sea."

The city hosted the 1964 Democratic National Convention which nominated Lyndon Johnson for President and Hubert Humphrey as Vice President. The convention and the press coverage it generated, however, cast a harsh light on Atlantic City, which by then was in the midst of a long period of economic decline. Many felt that the friendship between Johnson and the Governor of New Jersey at that time, Richard J. Hughes, led Atlantic City to host the Democratic Convention.

Like many older east coast cities after World War II, Atlantic City became plagued with poverty, crime, and disinvestment by the middle class in the mid to late 20th century.

The neighborhood known as the "Inlet" became particularly impoverished. The reasons for the resort's decline were multi-layered. The automobile became available to many Americans after the war. Atlantic City had initially relied upon visitors coming by train and staying for a couple of weeks. The car would allow people to come and go as they pleased, and many people would spend only a few days, rather than weeks.

Also, the advent of suburbia played a huge role. With many families moving to their own private houses, luxuries such as home air conditioning and swimming pools diminished the necessity for people to flock to the beach during the hot summer. Perhaps the biggest factor in the decline in Atlantic City's popularity came from cheap, fast jet service to other premiere resorts. Places such as Miami Beach and the Bahamas superseded Atlantic City as favored vacation spots.

By the late 1960s, the typical Atlantic City tourist was poor, elderly, or both. Many of the resort's great hotels, which were suffering from embarrassing vacancy rates, were either closed, converted to cheap apartments, or converted to nursing home facilities.

Prior to and during the advent of legalized gambling, many of these hotels would be demolished. The Breakers, the Chelsea, the Brighton, the Shelburne, the Mayflower, the Traymore, and the Marlborough Blenheim were demolished in the 1970s and 1980s.

Of all the pre-casino resorts that bordered the boardwalk, only the Claridge, the Dennis (now part of Bally's Park Place), the Ritz Carlton, and the Chalfonte-Haddon Hall Hotel survive to this day. The steel frame work of the old Ambassodor Hotel was used for the Tropicana Hotel and Casino, although its distinctive brick facade was removed and replaced with a more modern one. Smaller hotels off the boardwalk, such as the Madison House, also survive.

In an effort at revitalizing the city, New Jersey voters in 1976 approved casino gambling for Atlantic City; this came after a 1974 referendum on legalized gambling failed to pass. The Chalfonte-Haddon Hall Hotel became Resorts International; it was the first legal casino in the eastern United States when it opened on May 26, 1978.

Other casinos were soon added along the Boardwalk and later in the marina district for a total of 11 today. The introduction of gambling did not, however, quickly eliminate many of the urban problems that plagued Atlantic City. Many have argued that it only served to magnify those problems, as evidenced in the stark contrast between tourism-intensive areas and the adjacent impoverished working-class neighborhoods.

In addition, Atlantic City has played second-fiddle to Las Vegas as a gambling mecca in the United States, although in the late 1970s and 1980s, when Las Vegas was experiencing a massive drop in tourism due to crime, particularly the Mafia's role, and other economic factors, Atlantic City was favored over Las Vegas.

The rise of Mike Tyson in boxing, having most of his fights in Atlantic City in the '80s, also helped Atlantic City's popularity. On July 3, 2003, Atlantic City's newest casino, The Borgata, opened with much success. Another major attraction is the oldest remaining Ripley's Believe It or Not! Odditorium in the world

Facing stiff competition for the city's bread-and-butter day-trippers, developers are betting billions on new hotel rooms, hoping that the resort can bring in more overnight visitors.

Among the new or revamped properties is the $400 million Water Club. The city's first luxury noncasino hotel opened its doors and five pools last month in the marina district. Like its neighbor, the Borgata Hotel Casino & Spa, the Water Club was developed by a joint venture of Boyd Gaming Corp. and MGM Mirage.

Revel is a roughly $2 billion beachfront casino by Revel Entertainment Group under construction and targeted to open in 2010. Meanwhile, Coastal Marina LLC agreed to buy the Trump Marina Hotel Casino in May for $316 million. Coastal plans to breathe new life into the property with a Jimmy Buffett-inspired Margaritaville theme.

In all, as many as 3,000 hotel rooms are expected to be added this year, expanding the seaside resort's room inventory by about 20% and more are on the way.

Boosters say the additional rooms and new offerings, including spas, restaurants and designer stores, are part of the city's bid to remake itself as a destination that appeals to visitors looking to do more than gamble. Restaurateur Stephen Starr's Buddakan and stores like Tiffany & Co. are already located in Pier Shops at Caesars, a retail complex opened in 2006.

The pressure is on. With the national economy slowing and Pennsylvania casinos cutting into Atlantic City's customer base, casino revenue from slot machines and table games fell 5.7% last year, marking the city's first annual decline. Casino revenue through May of this year was down 5% from the year-earlier period. (info from Wikipedia & The Wall Street Journal
Posted by Michael N. Marcus at 3:19 AM