2008: It's legal to give the finger in Belmar, New Jersey 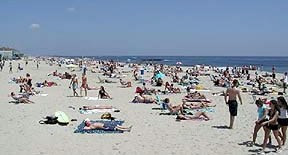 After battling rowdy renters and out-of-control keggers for decades, this Jersey shore party town has finally decided to lighten up a little.

Belmar, sometimes called "Fort Lauderdale North" for its reputation as a raucous party enclave, has scrapped laws against giving the finger and requiring beer kegs to be registered. The town's mayor said the rules were difficult to enforce. "I'm not sure anyone even knew that making obscene gestures was illegal," Mayor Ken Pringle said. "Right after we send out our tax bills, I tend to see a few."

The repeals come as the borough has clearly restored some of the quality of life that was routinely shattered by revelers in the 1980s and 90s.

"People that have a hard time obeying our strict rules seem to have gone to other beach towns where the rules are not as tough," he said. "Most of the people who are renting here who are deciding they can behave will not have a problem."

Belmar, on the central Jersey coast about 10 minutes south of Asbury Park, has long been a favorite spot for young people looking for summer fun. The town has 7,000 year-round residents, but the population swells to 60,000 after Memorial Day.

In 1990, there were over 1,200 summer rental units here; now there are just over 300. Lots that once held ramshackle party huts now boast $800,000 homes whose residents are not shy about calling the police to complain about noise.

Belmar has a slew of strict regulations for summer renters that include limits on how many people can cram into one building and when they can put their trash out at the curb. The town also has a "zero tolerance" policy for noise violations, and even leaving empty bottles or beer cups on the porch overnight.

"The cops are relentless here," said Matt Errichiello, a 23-year-old from Haworth who is in his third year of renting a house near the beach with friends. "At night, if you even speak loudly, you get a ticket. The rules are ridiculous."

One rule that's no longer on the books related to raising one's middle finger, or the many variants thereof. However objectionable it might be to some people, such a gesture is constitutionally protected free speech, said Pringle, an attorney as well as the mayor. He said the borough was contacted by civil libertarians who questioned the legality of several municipal ordinances.

The ban on "obscene gestures," which never spelled out exactly what was and was not covered, was overly subjective, Pringle agreed. No one can recall anyone being prosecuted for violating it.

And a beer keg tagging law, which Belmar enacted last year with great fanfare, withered and died after the state Division of Alcoholic Beverage Control said a handful of similar local laws enacted around the state requiring beer kegs to have the name, address and phone number of the person renting them was unconstitutional.

In summer rentals near the Belmar beach, the repeals are being hailed by the party crowd, some of whom consider the right to raise their middle finger in public a newly won freedom to cherish on Independence Day. (info from The Associated Press)
Posted by Michael N. Marcus at 5:36 AM