2008: first woman to place in top-three
in pit spitting 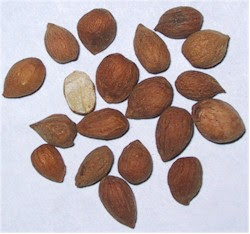 Amanda Jennings of Sault Ste. Marie, Ont., the first woman to place in the top three, did not qualify for championship competition but retained her title as women's champion with a spit of 43 feet, 11 inches. (info from The Associated Press, photo from tcm.health-info.org)
Posted by Michael N. Marcus at 5:26 AM