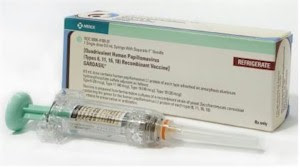 Texas became the first state to require all 11- and 12-year-old girls entering the sixth grade to be vaccinated against a sexually transmitted virus that causes cervical cancer starting in 2008.

Averting a potentially divisive debate in the Legislature, Gov. Rick Perry, a Republican, signed an executive order mandating shots of the vaccine Gardasil as protection against human papillomavirus, HPV.

Perry’s action, praised by health advocates, caught many by surprise in a largely conservative state where sexual politics is often a battleground.

Under the order, girls and women from 9 to 21 eligible for public assistance could get free shots immediately. The governor’s office said parents could opt out of the school program “for reasons of conscience, including religious beliefs.”

“Requiring young girls to get vaccinated before they come into contact with HPV is responsible health and fiscal policy that has the potential to significantly reduce cases of cervical cancer and mitigate future medical costs,” said Perry.

HPV, affecting 20 million people nationally, including one in four 15-to-24-year-olds, is the nation’s most common sexually transmitted disease. Texas has the second-highest number of women with cervical cancer, with nearly 400 deaths last year.

The vaccine is given in three shots over six months and are effective for at least five years, and together cost $360. Vaccinations for about 170,000 sixth-grade girls would cost about $60 million, with insurance covering many families’ costs, and the federal government assisting the state in subsidizing shots for needy girls and women.

The governor’s executive order directing his Health and Human Services Commission to adopt rules mandating the HPV inoculations along with others required for schoolchildren saved legislators from having to go on record for or against a bill involving child sexuality.

Some parents have voiced concern that the plan could send a message that sexual activity was condoned or that vaccinations made it safe. On the whole, however, conservative and religious groups have not come out strongly against the vaccinations as long as families can opt out.

The Texas Freedom Network, a nonpartisan advocacy group often critical of Perry, issued a statement praising his move. “Today’s decision by the governor is not just a positive step forward in efforts to promote women’s health,” said the group’s president, Kathy Miller. “It is also an important acknowledgment that health and science should not be held hostage to politics and ideology.” (info from The New York Times)
Posted by Michael N. Marcus at 5:25 AM