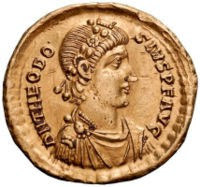 Flavius Theodosius (347 - 395), also called Theodosius I and Theodosius the Great, was Roman Emperor from 379-395. Reuniting the eastern and western portions of the empire, Theodosius was the last emperor of both the Eastern and Western Roman Empire. After his death, the two parts split permanently. He is also known for making Christianity the official state religion of the Roman Empire.

Born in Spain, to a senior military officer, Theodosius the Elder, Theodosius accompanied his father to Britannia to help quell the Great Conspiracy in 368. He was military commander (dux) of Moesia, a Roman province on the lower Danube, in 374.

In 378, after Valens was killed in the Battle of Adrianople, Gratian appointed Theodosius to replace the fallen emperor as co-augustus for the East. Gratian was killed in a rebellion in 383.

After the death in 392 of Valentinian II, whom Theodosius had supported against a variety of usurpations, Theodosius ruled as sole emperor, defeating the usurper Eugenius in 394, at the Battle of the Frigidus (modern Slovenia).

The Western Roman Empire is the western half of the Roman Empire after its division by Diocletian in 286. The capital of the eastern part was Nicomedia, and from 330 was Constantinople. The capital of the western part was Mediolanum (now Milan), and from 402 was Ravenna. The Western Empire existed intermittently in several periods between the 3rd century and the 5th century, after Diocletian's Tetrarchy and the reunifications associated with Constantine the Great, and Julian the Apostate.

The Eastern Roman Empire (known as the Byzantine Empire) survived for another millennium before being eventually conquered by the Ottoman Empire in 1453.

As the Western Roman Empire fell, a new era began in Western European history: the Middle Ages. (info from Wikipedia)
Posted by Michael N. Marcus at 5:27 AM