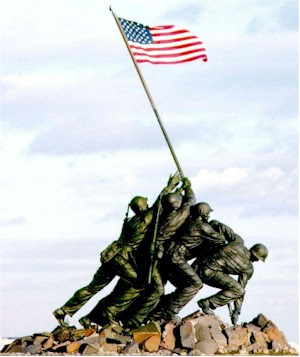 The small island of Iwo Jima is 660 miles south of Tokyo. One of its outstanding geographical features is Mount Suribachi, an extinct volcano that forms the narrow southern tip of the island and rises 550 feet to dominate the area.

During World War 2, by February 1945, US troops had recaptured most of the territory taken by the Japanese in 1941 and 1942; but Iwo Jima had not been recaptured, and was a primary objective in American plans to conclude the Pacific campaign.

On the morning of February 19, 1945, the 4th and 5th Marine Divisions invaded Iwo Jima after a somewhat ineffective bombardment lasting 72 hours. The 28th Regiment, 5th Division, was ordered to capture Mount Suribachi. They reached the base of the mountain on the afternoon of February 21, and by nightfall the next day had almost completely surrounded it.

On the morning of February 23, Marines of Company E, 2nd Battalion, started the tortuous climb up the rough terrain to the top. At about 10:30 a.m., men all over the island were thrilled by the sight of a small American flag flying from atop Mount Suribachi.

Photographer Joe Rosenthal caught the afternoon flag raising in an inspiring Pulitzer Prize winning photograph. When the picture was later released, sculptor Felix W. de Weldon, then on duty with the US Navy, was so moved by the scene that he constructed a scale model and then a life-size model of it.

Gagnon, Hayes, and Bradley, the three survivors of the flag raising (the others having been killed in later phases of the Iwo Jima battle), posed for the sculptor who modeled their faces in clay. All available pictures and physical statistics of the three who had given their lives were collected and then used in the modeling of their faces.

Erection of the memorial, which was designed by Horace W. Peaslee, was begun in September 1954. It was officially dedicated by President Dwight D. Eisenhower on November 10, 1954, the 179th anniversary of the U.S. Marine Corps.

Of the over 22,000 Japanese soldiers, 20,703 died and 216 were captured. The Allied forces suffered 27,909 casualties, with 6,825 killed in action. The number of American casualties were greater than the total Allied casualties on D-Day. Iwo Jima was also the only US Marine battle where the American casualties exceeded the Japanese. As all the civilians had been evacuated, there was not one civilian casualty.

The last known surviving flag-raiser, Charles W. Lindberg, who helped put up the first flag, died Sunday in Minnesota. He was 86.

But there remain lingering disputes over the identity of at least one man in the first flag-raising.

A California veteran of Iwo Jima, Raymond Jacobs, has said he believes he is the man with a radio on his back who had usually been identified as Pfc. Gene Marshall, a radio operator with the 5th Marine Division who died in 1987. The other men involved in the raising all have died.

Though most of the American dead were recovered in 1948, some 250 U.S. troops are still missing from the Iwo Jima campaign. Many were lost at sea, meaning the chances of recovering their remains are slim. But many others died in caves or were buried by explosions.

Japan's government and military are helping with the search on Iwo Jima, which this month was officially renamed Iwo To - the island's name before the war.

(info from National Park Service, Wikipedia, and the Associated Press) (photo of Iwo Jima memorial statue is based on photo of second flag raising by Joe Rosenthal, from National Defense University)

(Editor's remote connections with Iwo Jima flag raising: #1, as a Cub Scout, I helped hold up an American flag in a re-enactment of the historical event. #2, I've stayed at the Iwo Jima Motel, near the memorial in Arlington, VA. It was a bargain, and very convenient to Washington.)
Posted by Michael N. Marcus at 4:35 AM