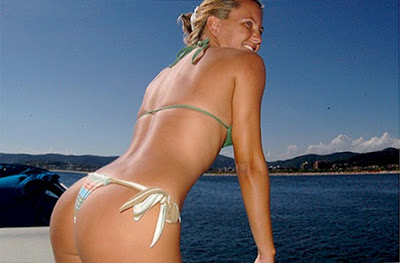 Although apparel resembling the bikini appears on ancient pottery, the “official” bikini was invented by French engineer Louis Réard and fashion designer Jacques Heim in 1946, and introduced at a fashion show in Paris. It was named after Bikini Atoll in the Pacific, the site of nuclear weapon tests a few days earlier, based on the assumption that the burst of excitement it would cause would be like an atomic bomb.

Reard's suit was a refinement of the work of Jacques Heim who, two months earlier, had introduced the "Atome" (named for its size) and advertised it as the world's smallest bathing suit. Reard 'split the "atome"' even smaller, but could not find a model who would dare to wear his design. He ended up hiring a nude dancer from the Casino de Paris as his model.

In 1951 bikinis were banned from the Miss World Contest following the crowning of Miss Sweden in a bikini and subsequent protests with a number of countries threatening to withdraw. In 1957, however, Brigitte Bardot's bikini in And God Created Woman created a market for the swimwear in the US, and in 1960, Brian Hyland's pop song Itsy Bitsy Teenie Weenie Yellow Polka Dot Bikini inspired a bikini-buying spree.

In 1962, an icon was born as Bond Girl Ursula Andress emerged from the sea wearing a white bikini in Dr. No. Finally the bikini caught on, and by 1963, the movie Beach Party, starring Annette Funicello (emphatically not in a bikini, by mentor Walt Disney's personal request) and Frankie Avalon, led a wave of films that made the bikini a pop-culture symbol.

In recent years, the term monokini has come into use for topless bathing by women: where the bikini has two parts, the monokini is the lower part. When monokinis are in use, the word bikini may jokingly refer to a two-piece outfit consisting of a monokini and a sun hat.

The tankini is a swimsuit combining a tank top and a bikini bottom.

The lower part of the bikini was further reduced in size in the 1970s to the Brazilian thong, where the back of the suit is so thin that it disappears into the butt crack.

The sex appeal of the apparel prompted numerous film and television productions as soon as public morals changed to accept it. They include the numerous surf movies of the early 1960s and the television series, Baywatch. Iconic portrayals of bikinis in movies include the previously mentioned Ursula Andress as Bond girl Honey Ryder in Dr. No (1962), Raquel Welch as the prehistoric cavegirl in the 1966 film One Million Years B.C., and Phoebe Cates in the 1982 teen film Fast Times at Ridgemont High. These scenes were recently ranked 1, 86, and 84 in Channel 4 (UK)'s 100 Greatest Sexy Moments (in film).

In addition, a variant of the bikini popular in fantasy literature is a bikini that is made up of metal to serve as (admittedly rather impractical) armor, sometimes referred to as a "chain mail bikini" or "brass bikini"; the character Red Sonja is a famous example.

In science fiction, Star Wars Episode VI: Return of the Jedi features a metal bikini costume, worn by Princess Leia when she is held captive by Jabba the Hut. This particular bikini has since been elevated to pop culture icon status, spawning various spoofs and parodies, including an episode of Friends; and even a dedicated fansite, Leia's Metal Bikini. (info from Wikipedia)
Posted by Michael N. Marcus at 6:08 AM