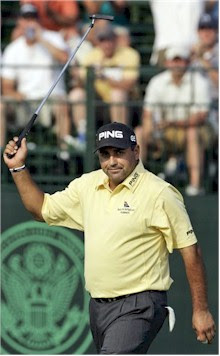 Holding off the number one and number three players in the world, Argentinian Angel Cabrera won the 107th US Open golf tournament in Oakmount, Pennsylvania on June 17.

Cabrera is the first Argentinian to win the US Open in its 107 year history. In fact, this is only the second time an Argentinian has won a Major. The first was the British Open in 1967.

Cabrera also joins the list of those whose first PGA tour win is the US Open.

Tiger Woods finished tied for second with Jim Furyk after attempting a 20 foot birdie putt on the 18th that would have forced a playoff. He wasn’t able to beat the toughest hole on the golf course and settled for a par and the tie for second.

Furyk finished at +6, and becomes the first player to finish second in consecutive opens. (info from Bodog Beat, photo from The Associated Press)
Posted by Michael N. Marcus at 3:58 AM