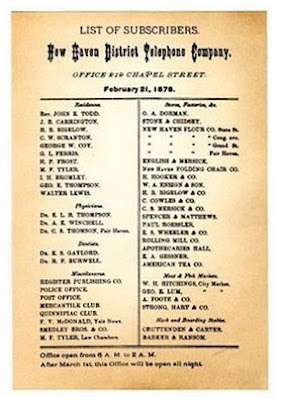 On January, 28 1878, the first commercial switchboard began operating in New Haven, Connecticut. It served 21 telephones on 8 lines, so many customers had party line service.

On February 21, 1878, the New Haven District Telephone Company published the world's first telephone directory -- a single page with only fifty names, without phone numbers. 129 years later, several of the entities on that first directory are still in business, but now they have phone numbers.

Also, in 1878 the Rutherford B. Hayes administration arranged for the installation of the first telephone in the White House. According to a report, the first call made by President Hayes went to Alexander Graham Bell himself, thirteen miles away. Hayes' first words instructed Bell to speak more slowly. (info from Privateline.com)