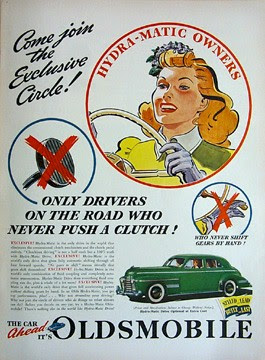 The automatic transmission was based on technology first developed in the early 1900s by German manufacturers of marine engines, but it was not adapted for automobiles for several decades.

In 1938, General Motors developed the first line of cars with automatic transmissions -- Oldsmobiles that offered "Hydra-Matic drive." The cars were first produced in the Fall of 1939, as 1940 models. In 1941, Chrysler followed suit and introduced three different cars that offered their version of automatic drive, "Vacamatic" (later called "Fluid Drive"). Automatic transmission was a fairly common option on most American cars by 1948.

The Olds tranny provided true clutchless driving with four forward speeds. Its fluid coupling between engine and transmission eliminated the clutch and its associated foot work. Olds made the breakthrough Hydra-Matic available on all models for only $57.

The Chrysler Vacamatic was really only semi-automatic. It featured four speeds and would switch automatically between the two lower or two higher gears, but the driver needed to use the clutch to switch from a lower gear to a higher gear or vice versa. (info from Yahoo and Wikipedia, photo from Hemmings)
Posted by Michael N. Marcus at 4:21 AM

my grandfather Llewelyn Fletcher was the inventor of the 1939 automatic transmission. Google his name and you will see the patent. Detroit came into the possession and use of this patent under less than honorable means.