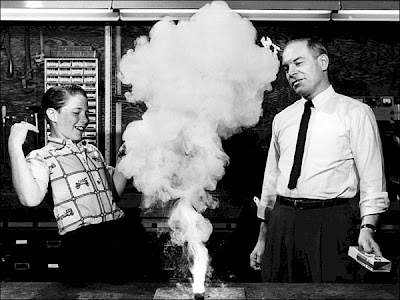 "Mr. Wizard" Don Herbert, who explained the world of science to millions of young baby boomers on television in the 1950s and 60s and for a later generation on the Nickelodeon cable TV channel in the 1980s, died Tuesday.

He was 89, and died at his home in Bell Canyon, CA after a long battle with multiple myeloma.

A low-key, avuncular presence who wore a white dress shirt with the sleeves rolled up and a tie, Herbert launched his weekly half-hour science show for children on NBC in 1951. Watch Mr. Wizard was broadcast live from Chicago on Saturdays the first few years and then from New York. It ran for 14 years.

Herbert used basic experiments to teach scientific principles to his TV audience via an in-studio guest boy or girl who assisted in the experiments.

"I was a grade school kid in the '50s and watched 'Mr. Wizard' Saturday mornings and was just glued to the television," said Nikosey, president of Mr. Wizard Studios, which sells Mr. Herbert's science books and old TV shows on DVD.

"The show just heightened my curiosity about science and the way things worked," said Nikosey. "I learned an awful lot from him, as did millions of other kids."

In explaining how he brought a sense of wonder to elementary scientific experiments, Herbert said that he "would perform the trick, as it were, to hook the kids, and then explain the science later."

He said, "A lot of scientists criticized us for using the words 'magic' and 'mystery' in the show's subtitle, but they came around eventually."

Herbert had an important and lasting impact.

"Over the years, Don has been personally responsible for more people going into the sciences than any other single person in this country," George Tressel, a National Science Foundation official, said in 1989. "I fully realize the number is virtually endless when I talk to scientists. They all say that Mr. Wizard taught them to think."

After Watch Mr. Wizard ended its 14-year-run in 1965, Herbert showed up frequently on talk shows, including The Tonight Show and Late Night With David Letterman. Watch Mr. Wizard was revived on NBC in 1971 for a season, and Mr. Wizard's World ran on Nickelodeon from 1983 to 1990.

Born in 1917, in Waconia, MN, Herbert grew up in La Crosse, WI, and graduated from LaCrosse State Teachers College in 1940. In 1942, he volunteered for the Army Air Forces. As a B-24 bomber pilot, he flew 56 missions over Italy, Germany and Yugoslavia and received the Distinguished Flying Cross and the Air Medal with three oak-leaf clusters.

(info from The Seattle Times, photo from The New York Times) CLICK for Mr. Wizard's website. You can order DVDs of the old shows.
Posted by Michael N. Marcus at 5:31 AM