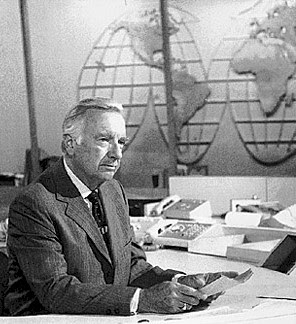 In 1950, Walter Cronkite joined CBS News in its young and growing television division, recruited by Edward R. Murrow, who had previously tried to hire Cronkite from the United Press during WW2. Cronkite began work at the CBS station in Washington, DC.

On July 7, 1952, the term "anchor" was coined to describe Cronkite's role at both the Democratic and Republican National Conventions, which marked the first nationally-televised convention coverage. Cronkite anchored the network's coverage of the 1952 presidential election as well as later conventions, until in 1964 he was temporarily replaced by the team of Robert Trout and Roger Mudd. This proved to be a mistake, and Cronkite was returned to the anchor chair for future political conventions.

From 1953 to 1957, Cronkite hosted the CBS program You Are There, which reenacted historical events, using the format of a news report. His famous last line for these programs was: "What sort of day was it? A day like all days, filled with those events that alter and illuminate our times... and you were there." He also hosted The Twentieth Century, a documentary series about important historical events of the century which was made up almost exclusively of newsreel footage and interviews. It became a long-running hit.

Cronkite succeeded Douglas Edwards as anchorman of the CBS Evening News on April 16, 1962, a job in which he became an American icon. The program expanded from 15 to 30 minutes in 1963, making Cronkite the anchor of American network television's first nightly half-hour news program.

Cronkite announced that he intended to retire from The CBS Evening News on February 14, 1980; at the time, CBS had a policy in place that called for mandatory retirement by age 65. Although sometimes compared to a father figure or an uncle figure, in an interview about his retirement he described himself as being more like a "comfortable old shoe" to his audience. His last day in the anchor chair at the CBS Evening News was on March 6, 1981; he was succeeded the following Monday by Dan Rather.

Cronkite's farewell statement: “ This is my last broadcast as the anchorman for The CBS Evening News. For me, it's a moment for which I long have planned, but which, nevertheless, comes with some sadness. For almost two decades, after all, we've been meeting like this in the evenings, and I'll miss that. But to those who have made anything of this departure, I'm afraid it made too much. This is but a transition, a passing of the baton. A great broadcaster and gentleman, Doug Edwards, preceded me in this job, and another, Dan Rather, will follow. And anyway, the person who sits here is but the most conspicuous member of a superb team of journalists; writers, reporters, editors, producers, and none of that will change. Furthermore, I'm not even going away! I'll be back from time to time with special news reports and documentaries, and, beginning in June, every week, with our science program, Universe. Old anchormen, you see, don't fade away; they just keep coming back for more. And that's the way it is: Friday, March 6, 1981. I'll be away on assignment, and Dan Rather will be sitting in here for the next few years. Good night."

When Dan Rather left the evening news show in 2004 after 23 years as anchor, Cronkite said that if he (Cronkite) knew he would live so long, he would not have let Rather replace him at age 65.

In May 2007, Cronkite was honored with a CBS special for his 90th birthday. (info from Wikipedia and other sources)
Posted by Michael N. Marcus at 5:40 AM