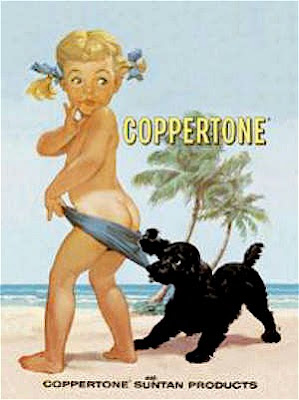 The ancient Greeks used olive oil as a type of sunscreen, but it did not work very well. An effective sunscreen was developed in 1938 by Swiss chemistry student Franz Greiter, after he had severely burnt himself during an ascent of the Piz Buin on the border between Switzerland and Austria. He named his product, which he had developed in a small laboratory in his parents' home, Gletscher Creme (Glacier Cream). Still existing examples of the 'Glacier Cream' have shown to have a SPF of 2 and thus could be classed as an effective sunscreen.

In 1944, during World War II, many soldiers were getting serious sunburn. A pharmacist named Benjamin Greene decided to create something that would save the soldiers from the sun’s harmful rays. In his wife’s oven, he created a sticky, red substance which he called "red vet pet" (red veterinary petrolatum), which worked primarily by physically blocking the sun's rays with a thick petroleum-based product similar to Vaseline. Greene tested it on his own bald head. It did not work nearly as well as modern sunscreens, but it was a start.

Sunscreen has come a long way since its initial days. Modern products have much higher protection factors than Greene's sunscreen, and modern products can also be water- and sweat-resistant. But there are also negative effects. Some people rely too much on the product and do not understand the limitations of the sun protection factor (SPF); they assume that buying anything over SPF 30 will automatically prevent them getting burnt no matter how long they can stay in the sun. Too much sunbathing is one of the major causes of skin cancer across the world.

In 1944, Green used his invention as the basis for Coppertone Suntan Cream - the very first consumer sunscreen product. In fact, this mixture of cocoa butter and jasmine was concocted on his wife's stove and tested on his own bald head.

The company became famous in 1959 when it introduced the Coppertone girl, a 3-year-old girl in pigtails named Cheri Brand. Cheri had posed for a photo in her backyard and soon became Little Miss Coppertone, a symbol of summer in the long-running Coppertone ad campaign whose famous slogans proclaim "Don't be a Paleface!" and "Tan - Don't Burn."

The Coppertone ad campaign was based on drawings created by Cheri's mother, Joyce Ballantyne Brand, a commercial artist (who also drew the Pampers baby in 1977). She was paid $2,500 for the artwork based on her little girl.

Cheri Brand once said "Everybody has their baby pictures in their family album with their diapers falling off, I just happened to have mine on a billboard" (and a few million bottles of suntan lotion).

The dog depicted in the ad pulling down the pants of the little girl to reveal her tan-line was based on a neighbor's cocker spaniel. A popular belief that Jodie Foster was the original Coppertone girl is misleading. Foster did, however, get her start in showbiz for a Coppertone ad in 1965. She was three years old at the time and appeared in the ad on a boat with her family.

Competitor Hawaiian Tan goes back to 1964 with the founding of Liana of Waikiki by Dr. Horst Baumgartner in Honolulu. As a chemist, Dr. Baumgartner was not satisfied with the suntan lotions then on the market, and he formulated Hawaiian Tan, which was introduced in the Hawaiian Pavillion at the 1964 World's Fair in New York. Soon Hawaiian Tan became increasingly popular with tourists in Hawaii, and its popularity spread to the US mainland.

Following its start in Hawaii, the company was moved to the US Virgin Islands, and Hawaiian Tan became popular with tourists to the Caribbean. The original product line was augmented to include coconut-based Coco Sol tan accelerator oil and lotion, Coco Baby Oil, Coco Lotion hand and body moisturizers, and other after-sun skin care products. In 1978, the company moved to Californa, and was incorporated as Caribia, Inc. (info From Wikipedia, Hawaiian Tan, Coppertone, TV Acres)
Posted by Michael N. Marcus at 5:08 AM