1973: last American president to wear a top hat at inauguration 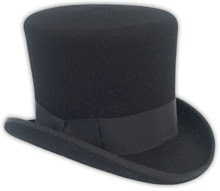 The first top hats were made with felt, mostly from beaver fur. Later, they would be made of silk. A popular version, particularly in the United States in the 19th century, was the stovepipe hat, which was popularized by Abraham Lincoln. Unlike many top-hats, this version was straight, like piping, and was not wider at the top and bottom. Often they were taller than the typical top-hat.

Later on, top hats were sometimes given an internal hinged frame, making them collapsible. Such hats are often called the "opera hat" or "Gibbus," though the term can also be synonymous with any top hat, or any tall formal men's hat. In the 1920s they were also often called "high hats".

In the latter half of the 19th century, the top hat gradually fell out of fashion, with the middle classes adopting bowler hats and soft felt hats such as fedoras, which were more convenient for city life, as well as being suitable for mass production.

In comparison, a top hat needed to be handmade by a skilled hatter, with few young people willing to take up what was obviously a dying trade. The top hat became associated with the upper class, becoming a target for satirists and social critics. By the end of World War I it had become a rarity in everyday life. It continued to be used for formal wear, with a morning suit in the daytime and with evening clothes (tuxedo or tailcoat) until the late 1930s. (The top hat is featured as one of the original tokens in the board game Monopoly.)

The top hat persisted in certain areas, such as politics and international diplomacy, for several more years. In the newly-formed Soviet Union, there was a fierce debate as to whether its diplomats should follow the international conventions and wear a top hat, with the pro-toppers winning the vote by a large majority.

The last American president to wear a top hat to an inauguration was Richard Nixon. Gerald Ford was not inaugurated at the Capitol and Jimmy Carter abolished the use of morning dress for inaugurations. It was reinstated, minus a top hat, by Ronald Reagan but not worn by any later presidents to date. (info from Wikipedia)
Posted by Michael N. Marcus at 5:52 AM