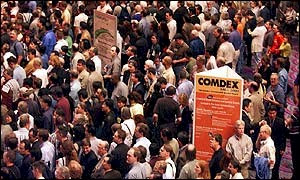 COMDEX (Computer Dealers Expo) was a huge trade show held mostly in Las Vegas from 1979 to 2003. It was one of the largest trade shows in the world, first held in 1979 at the MGM Grand, with 167 exhibitors and 3904 attendees.

Originally open only to those directly involved in the computer industry, COMDEX was the one show where all levels of manufacturers and developers of computers, peripherals, software, components and accessories came in direct contact with retailers, consultants, and their competitors.

Colloquially known as "Geek Week," COMDEX evolved into a major technical convention, with the industry making major product announcements and releases there. Numerous small companies from around the world rose to prominence following appearance at COMDEX, and industry leaders sought opportunities to make keynote addresses. While a few keynotes were used as product promotions, (including those by Microsoft head Bill Gates, most discussed the computer industry, history, trends and future potential. Commercial acceptance of the Linux family of operating systems got a major boost following a 1999 keynote appearance by its creator, Linus Torvalds.

In the late 1980s, COMDEX was opened to the public, causing an explosion in attendance, but also a dilution of COMDEX's impact on the industry and a loss of the focus which had made the show a "must-attend" event. Retailers and consultants complained that "leading edge" customers, upon whom they relied for early adoption of new technology, were buying products at "show specials" and then expecting the dealers to support those products.

At the same time, costs of attendance ballooned with the number of attendees. Hotels as far away as Primm, 45 miles distant at the California state line, were packed even when charging several times their regular rates. Reservations for closer rooms for the following year's show were often sold out during the current show at up to several thousand dollars per night.

Hotels justified the higher prices by noting that, while COMDEX attendees saturated lodging facilities, on average they spent less time (and money) in the casinos which were the hotels' lifeblood.

After the Spring 1981 show in New York and 1982 in Atlantic City, COMDEX began regular spring shows in Atlanta from 1983 through 1988 (including a show combined with the Consumer Electronics Show that I attended). Then it started alternating sites almost every other year between Atlanta and Chicago, though the show spent two straight years in Chicago because of preparations in Atlanta for the 1996 Summer Olympic Games.

Following COMDEX Fall 1999, organizers made major changes to their criteria for admission of media, rejecting nearly all but those who were on editorial assignment from a handful of "acknowledged" trade papers. Though offered regular "public" attendance, this left hundreds of regular, long-standing press attendees from magazines and newspapers around the world with bad feelings toward the show. As press credentials were necessary to gain the level of access necessary to make the expensive trip worthwhile, most refused to go and many told vendors that they would disregard product announcements made at or in relation to COMDEX.

When other computer hardware exhibitions such as CeBIT in Germany and COMPUTEX in Taiwan continued to expand, the runaway costs and decline in quality of COMDEX had negative impacts. In addition, the annual Consumer Electronics Show in the US had gained importance, and many exhibitors determined that CES was the more cost-effective show. In 2000, major companies such as IBM, Apple Computer, and Compaq (now merged with Hewlett-Packard) decided to discontinue their involvement with COMDEX to allocate the resources more efficiently. Attendance dropepd after the September 11,2001 terrorist atacks.

In June 2004, COMDEX officially postponed the 2004 exhibition in Las Vegas due to lack of heavyweight participants. COMDEX was cancelled for 2005 and 2006, and its future status is uncertain.

Comdex was started by Las Vegas hotel magnate and philanthropist Sheldon Adelson, who sold it to Japanese technology conglomerate Softbank Corp. in 1995 for $860 million. In 2003, Softbank sold it to MediaLive, which apparently used the name Key3Media and went bust. In 2006, MediaLive was sold to CMP Media, which holds trade shows and publishes Information Week and other trade publications. A COMDEX.com website is currently operated by CMP, which said it hopes to bring back the COMDEX show. (info from Wikipedia and other sources) (photo from BBC)
Posted by Michael N. Marcus at 4:24 AM