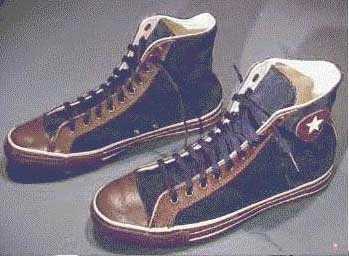 The sneaker is a relatively modern invention with its roots in the Industrial Revolution. With new materials like vulcanized rubber and new production methods like assembly lines, shoes could now be manufactured more cheaply and efficiently where once each shoe had to be produced by hand by a shoemaker.

The early part of the 20th century witnessed the birth of many of the familiar sneaker brands, but sneakers stayed the domain of athletes until Hollywood picked up on the fashion, first in the 1930's and then again in the 1950's when teen icon, James Dean, was photographed wearing jeans, a t-shirt, and sneakers. From then on, these cheap, durable shoes became part of the official uniform of kids around the world.

The following timeline will illustrate the technological and cultural history of the sneaker.

1892: Goodyear, then a rubber shoe company and division of the U.S. Rubber Company, begins to manufacture rubber and canvas shoes under different names, finally settling on Keds.

1917: Keds are the first mass marketed athletic shoes. These shoes are later called sneakers by Henry Nelson McKinney, an advertising agent for N. W. Ayer & Son, because the soles are quiet and make no noise on any surface.

1923: The All Star gives way to the Chuck Taylor All Star, a staple of basketball players, kids, and rebels for more than 50 years. Also known as Chucks, Cons, Connies, more than 744 million pairs have been sold in 144 countries.

1924: Adi and Rudolph Dassler, with the help of some 50 family members, register their business as Gebr der Dassler Schuhfabrik in Herzogenaurach, Germany.

1935: Converse releases the Jack Purcell with its telltale “Smile” on the front. They became a staple of early Hollywood and the bad boy crowd, but remained famous longer after the 1930's badminton/tennis champion, Jack Purcell, had faded into history. (Editor's Note: Jack Purcell sneakers were probably the first premium sneaker, selling for $8.98 a pair in the mid 1960s, when normal sneakers sold for $5.98. At the time, they were the only sneaker made in different widths. I got a 50-cent "spiff" for each pair I sold.)

1948: Puma Schuhfabrik Rudolf Dassler is founded and the world is introduced to the PUMA Atom, PUMA's first football shoe worn by members of the West German football team.

1950's: Sneakers were the preferred footwear of teenagers and the symbol of rebellion. These cheap and easily obtained shoes were worn by students around the world. In the US, cheerleaders wore sweaters, short skirts, and ankle socks with Keds. The fashion got a boost when James Dean was photographed wearing Levis jeans and white sneakers.

In the mid part of the 20th century, the sneaker became a more common cultural phenomenon with emphasis being put on new technologies for athletes, and athletes such as Michael Jordan were paid to endorse expensive sneakers, some selling for over $100 per pair. Sneakers became a status symbol, and theft became a problem in inner cities. In 1968, Puma was the first sports shoe manufacture to offer Velcro fasteners. In 1969, Quarterback Joe Namath, wearing Pumas, led the New York Jets to victory in SuperBowl III.

The latter part of the 20th century and the first part of the 21st century were all about celebrity endorsements and limited editions. Nike' released retro editions of the classic Air Jordans and continued to release new models. In 1971, the Nike Swoosh trademark was purchased from a graphic design student for $35. Bill Bowerman, father of Nike Inc. died in December 1999, but Nike kept going strong to release a revolution cushioning system called Nike Shox. Reebok, in a bid to strengthen their sales, formed a partnership with various music artists to create their Sound and Rhythm line. In 2003, Nike acquired sneaker pioneer Converse.

(info from SneakerHead.com, PFFlyers.com,
Posted by Michael N. Marcus at 5:07 AM