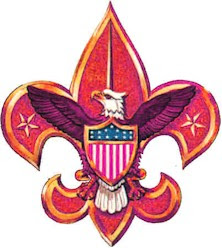 Catherine N. Pollard was the first woman to be a scoutmaster for the Boy Scouts of America, heading a Milford, CT troop from 1973 to 1975 because no men had volunteered. She was a widow who lived with a son and daughter, who described herself as a "tomboy who enjoys camping, chops her own wood, drives a tractor and rides a motorcycle."

During this time she was not registered as the troop's Scoutmaster. In both 1974 and 1976, Catherine attempted to register as the troop's Scoutmaster, but each time her application was rejected. BSA stated that boys needed male role models and she would not be able to provide that. Finally she decided to file a complaint for sex discrimination with the Connecticut Commission on Human Rights and Opportunities.

When she filed the complaint, she was forced to relinquish her leadership role in Troop 13. Once again, no man stepped forward to take over as Scoutmaster. As a result, the troop was forced to disband. Catherine rejected BSA's role-model argument. "Who models the male in the first place?" she asked. "The mothers do. The fathers are out working."

The state Commission on Human Rights and Opportunities sided with her, but state courts reversed the ruling. In 1987 the state Supreme Court upheld a lower-court ruling that boys “in the difficult process of maturing to adulthood” needed the guidance of men.

In February 1988, however, the Boy Scouts of America did away with all gender restrictions on volunteer positions, and Ms. Pollard, who was 69 at the time, became a scoutmaster in Milford.

“I do think that this is marvelous,” she said at the time, “because there have been women all over the United States, in fact all over the world, that have been doing these things for the Boy Scouts because they could not get a male leader, but we could not get recognition.” (info from The New York Times and bsa-discrimination.org)
Posted by Michael N. Marcus at 4:18 AM