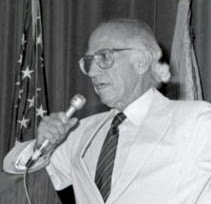 Jonas Edward Salk (1914 – 1995) was an American biologist and physician best known for the research and development of the first effective polio vaccine.

In 1947, Salk joined the University of Pittsburgh, as head of the Virus Research lab. Though he continued his research on improving the influenza vaccine, he set his sights on the poliomyelitis (polio) virus.

At that time, it was believed that immunity can come only after the body has survived at least a mild infection by live virus. In contrast, Salk observed that it is possible to acquire immunity through contact with inactivated (killed) virus.

The vaccine was first tested in monkeys, and then in patients at the D.T. Watson Home for Crippled Children. After successful tests, in 1952, Salk tested his vaccine on volunteering parties, including himself, the laboratory staff, his wife, and his children.

In 1954, national testing began on two million children, ages six to nine, who became known as the Polio Pioneers. This was one of the first double-blind placebo-controlled tests, which has since become standard: half of the treated received the vaccine, and half received a placebo, where neither the individuals nor the researchers know who belongs to the control group and the experimental group.

One-third of the children, who lived in areas where vaccine was not available, were observed in order to evaluate the background level of polio in this age group. On April 12, 1955, the results were announced: the vaccine was safe and effective. The patient would develop immunity to the live disease due to the body's earlier reaction to the killed virus.

Salk's vaccine was instrumental in beginning the eradication of polio, a once widely-feared disease. Polio epidemics in 1916 left about 6000 dead and 27,000 paralyzed in the United States. In 1952, 57,628 cases were recorded in the U.S. After the vaccine became available, polio cases in the US dropped by 85-90 percent in only two years.

However, the live-virus oral vaccine developed by Albert Sabin became the preferred alternative after a sometimes intense clash between the two scientists and their adherents.

The Salk vaccine, which is injected, proved to be effective in sharply reducing the number of polio cases in the United States. One disadvantage to the Salk vaccine was that booster shots had to be taken periodically. But the Sabin vaccine had the advantage of easier delivery and became accepted in the United States after the testing abroad. It was licensed in 1961 and eventually became the vaccine of choice in most parts of the world. The last indigenous case of polio in the US was reported in 1991. Partly because of that fact, only inactivated, Salk-type polio vaccines have been recommended for use in the United States since 2000. (info from Wikipedia)
Posted by Michael N. Marcus at 4:21 AM