1789: first presidential election in the US 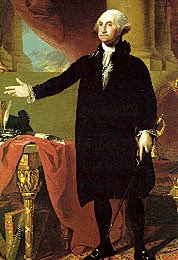 The US presidential election of 1789 was the first held in the manner described by the newly established Constitution.

Before this time, the US had no Presidential office but instead gave limited president-like powers to the Chairman of Congress, a position like the current Speaker of the House or President of the Senate.

George Washington had little opposition for election as President. Under the system then in place, each voting elector cast two votes, and the recipient of the greatest number of votes was elected President, providing they equaled or exceeded half the total number of electors.

The runner-up became Vice President. At that time, the Twelfth Amendment to the United States Constitution had not been passed and thus the electoral system for that era differs from most elections. Washington was now very popular, as he successfully presided over the Philadelphia Convention and made the US, which was weakened by the Articles of Confederation, much stronger through the new US Constitution.

The recipient of 34 electoral votes, John Adams of Massachusetts, finished second in voting and was elected Vice President.

In the absence of conventions, there was no formal nomination process. The framers of Constitution had presumed that Washington would be the first President, and once he agreed to come out of retirement to accept the office, there was no opposition to him. Individual states chose their electors, who voted all together for Washington when they met.

Electors used their second vote to cast a scattering of votes, many voting for someone besides Adams less out of opposition to him than to prevent Adams from matching Washington's total.

Only ten states out of the original thirteen cast electoral votes in this election. North Carolina and Rhode Island were ineligible to participate as they had not yet ratified the United States Constitution. New York failed to appoint its allotment of eight electors because of a deadlock in the state legislature.