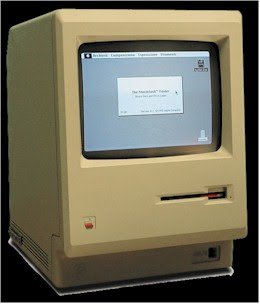 The original Apple Macintosh was released 24 years ago this week, on January 24, 1984. It was the first commercially successful personal computer to feature a mouse and a graphical user interface (GUI) rather than a command line interface. It followed the similar, more expensive, unsuccessful Apple Lisa computer.

The idea for a personal computer appropriate for the ordinary consumer dates to the late 1970s and an Apple development team was established in 1979. After the success of the original Macintosh in 1984, the company quickly established market share only to see it dissipate in the 1990s as Microsoft came to monopolize personal computing.

Apple consolidated multiple, consumer-level desktop models into the 1998 iMac, which sold extremely well and saw the brand name revitalized. Current Mac systems are mainly targeted at the home, education, and creative professional markets. They are the upgraded iMac and the entry-level Mac mini desktop models, the workstation-level Mac Pro tower, the MacBook, MacBook Air and MacBook Pro laptops, and the Xserve server.

Production of the Mac is based on a vertical integration model in that Apple facilitates all aspects of its hardware and creates its own operating system that is pre-installed on all Macs. Apple exclusively produces Mac hardware, choosing internal systems, designs, and prices. Apple does use third party components, however; current Macintosh CPUs use Intel's x86 architecture (formerly the AIM alliance's PowerPC and originally Motorola's 68k). Apple also develops the operating system for Macs, currently Mac OS X 10.5 "Leopard".

This is in contrast to most IBM compatible PCs, where multiple vendors create hardware intended to run another company's software. The modern Mac, like other personal computers, is capable of running alternative operating systems such as Linux, FreeBSD, and Microsoft Windows, considered to be the Mac's biggest competitor. (info and photo from Wikipedia)
Posted by Michael N. Marcus at 4:54 AM